Lisa’s In and Around Tokyo: Exploring Kameari--Home to heartwarming comedic manga 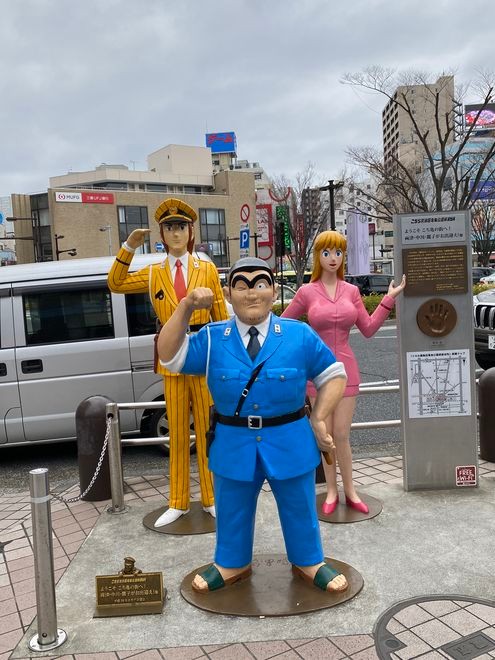 Visitors are welcomed by colorful statues of Ryo-san, Reiko and Nakagawa in front of Kameari Station’s south exit. There are 15 bronze statues of “KochiKame” manga characters around the area surrounding Kameari Station. (Photo by Lisa Vogt)

Is there a turtle, or is there not? There IS. The name of the place, for heaven’s sake, is Kameari!

I’ve always had an affinity for turtles. Maybe it was because when I was a little girl, my mother wouldn’t let me have a pet that was high maintenance or that made any kind of noise. That left me with few choices, so I went with two turtles.

Long story short, I suffocated them to death. My heart was in the right place, and to this day, a half-century later, I still include them in my prayers, asking for forgiveness.

Oh, back to Kameari. The first thing that seems to pop into people’s minds is “KochiKame,” or “Kochira, Katsushika-ku Kameari Koen-mae Hashutsujo,” a gag-driven, yet heartwarming manga about the misadventures of a police officer who never seems to do any real work.

When you leave JR Joban Line Kameari Station, you are greeted by colorful statues of Ryo-san (the main character), Reiko Catherine Akimoto (the wealthy and voluptuous half-French officer) and Keiichi Nakagawa (the exotic yellow-pinstriped uniform cop).

No doubt, if you’re a fan, you already have on your camera roll photos of you posing with them. You can spend a whole day walking around places that have appeared in the manga series. The town has capitalized on the manga, and there are signboards throughout.

The original name for Kameari was Kamenashi. I kid you not. That’s right, NO turtles. What gives? Well, for one, this area is old. There’s a record of Kamenashi in a document from the year 1398, which clearly uses the kanji “turtle” and “none.”

Fast-forward to 1559, and there’s a record of Kamenashi written “turtle and pear.” Since turtles are considered auspicious, it stands to reason that “pear” would be favored over “none.” But come to think of it, why risk misunderstandings if you can change the second part altogether? Done. From 1644, maps show Kameari. Case closed.

The more than 700-year-old Kameari Katori shrine is a destination in itself. All structures except the main hall and hand-purifying station are modern with cool, clean lines.

I wanted to go inside the sleek sweets shop and the Patisserie La Rose des Japonais cafe, both on the premises, but they were full. The juxtaposition of traditional Japan and contemporary international culture and cuisine was intriguing.

Also, the shrine is not protected by koma-inu (guardian lion dog) statues, but koma-kame! In need of some smiles? Kameari is your destination.

This article by Lisa Vogt, a Washington-born and Tokyo-based photographer, originally appeared in the Feb. 21 issue of Asahi Weekly. It is part of the series "Lisa’s In and Around Tokyo," which depicts the capital and its surroundings through the perspective of the author, a professor at Meiji University.