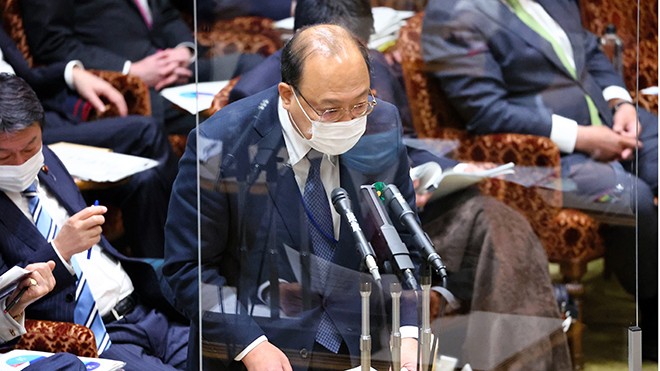 An official of Nippon Telegraph and Telephone Corp.’s public relations division told The Asahi Shimbun that the meals in question did take place and the company is investigating.

Yasuhiko Taniwaki, vice minister for policy coordination at the telecommunications ministry, was among the officials reported to have attended the eating and drinking sessions.

He has also been questioned in the Diet over being treated to expensive dinners by Prime Minister Yoshihide Suga’s eldest son and other officials of Tohokushinsha Film Corp., a Tokyo-based company that produces TV programs and satellite-based broadcasting.

In the current session of the Diet, Taniwaki has admitted to having had meals and drinks with other operators of broadcasting and telecommunications businesses, but denied being treated to meals that could violate the ethics code for central government employees.

In addition to Taniwaki, Eiji Makiguchi, director-general of the Global Strategy Bureau of the ministry, and Makiko Yamada, a former Cabinet public relations secretary, were also entertained by NTT President Jun Sawada and other officials of NTT group companies, according to the Bunshun Online report.

In June last year, Makiguchi and Yamada, who was then vice minister for policy coordination at the ministry, were treated to meals that cost about 50,000 yen ($470) each, the report said.

Taniwaki, meanwhile, had three wining and dining sessions totaling more than 170,000 yen between September 2018 and July 2020, according to the report.

The ethics code prohibits central government employees from being treated to a free meal by stakeholders. They are allowed to have meals and drinks with stakeholders as long as the participants split the bill but are required to notify the respective ministries and agencies in advance if the meal costs more than 10,000 yen.

The three, including Taniwaki, did not notify the telecommunications ministry in advance about the eating and drinking sessions, according to the ministry’s secretariat division.

Taniwaki became director-general of the Telecommunications Bureau of the ministry in July 2018 and has spearheaded efforts to cut mobile phone fees, one of Suga’s pet projects.

Taniwaki left the ministry building on the evening of March 3 without responding to questions from reporters.

“We will refrain from commenting as we have yet to verify the report,” a ministry official said.

Chief Cabinet Secretary Katsunobu Kato said at a news conference on the morning of March 4 that Taniwaki admitted to having the meals when asked about them by a ministry official.

Kato added that on March 3 the ministry informed the National Public Service Ethics Board of the National Personnel Authority that an investigation would be launched into the matter.