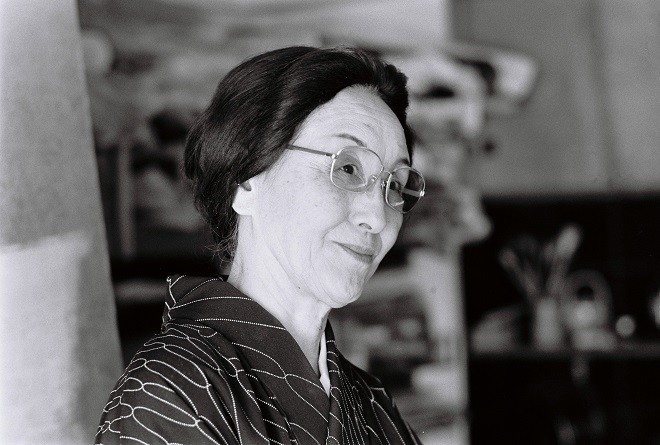 To confess, I was beyond hopeless at calligraphy as a schoolboy.

I enjoyed grinding the inkstick against the inkstone, but I could never get my brushstrokes right.

I practiced by tracing the teacher's sample writing. But when even that began to feel like an insurmountable wall, I just gave up.

For artist Toko Shinoda, who died on March 1 at age 107, such a wall was apparently nothing she couldn't leap over with ease.

It was her nature to take the liberty of making five-stroke kanji characters out of three-stroke ones.

"You're a dog tethered to a post and able to move only as far as the leash will allow. That's calligraphy," she once said in an interview with The Asahi Shimbun. "I want to write an infinite number of horizontal lines that will go on forever."

Before World War II, Shinoda penned classic Chinese poems and "waka" Japanese verse while trying to grasp the essence of the form of each character.

She then pursued abstract expressionism in her search for the beauty and strength in lines, eventually developing her trailblazing style of "bokusho," or avant-garde calligraphic drawings.

Her works have been acquired by world-class museums in and outside Japan.

I learned of her demise yesterday and revisited her creations in her published books.

Every hiragana phonetic letter looks like the stem of some wild grass. Her kanji characters resemble "kikko moji," or ancient Chinese script written on tortoiseshell.

They are all in black and white only, but they pack the impact of artwork in the most vivid colors.

I was struck anew by the sheer power of expression of her works in dark ink, pale ink, bold lines and delicate strokes.

In contrast to her high-energy calligraphic drawings, her essays reveal a uniquely "rounded" personality.

"Life is like a narrow white road between the river of ice and the river of fire," she wrote. "I am muddling through in search of that road."

She also noted, "No matter how many works I produce, I still find myself unable to express anything."

Her life was guided by ink, brush and paper and was defined, along with her
writing and drawing, by her refusal to flinch at any wall or to
confine herself to any mold.