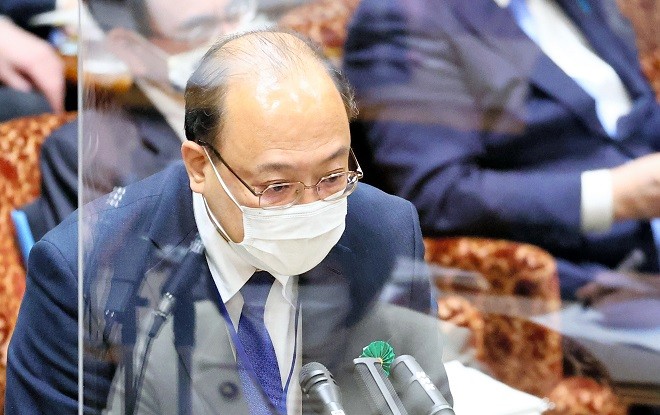 It has been reported that some of them were treated to expensive meals not only by the company that employs Prime Minister Yoshihide Suga’s eldest son but also by telecommunications giant NTT group.

The Ministry of Internal Affairs and Communications says it will investigate the fresh allegations for a possible violation of the National Public Service Ethics Law.

The excessively close relationship between bureaucrats and stakeholders cast serious doubt about the fairness of their policy decisions and actions. The inquiry should leave no stone unturned.

The weekly Shukan Bunshun reported that the president and other senior executives at Nippon Telegraph and Telephone Corp. treated Yasuhiko Taniwaki, vice minister for policy coordination at the telecommunications ministry, and other senior ministry officials to lavish dinners.

The government owns more than a third of the shares of NTT and the telecommunications minister has the power to supervise its management and issue orders for specific actions.

NTT, which is required to win the approval of the telecommunications ministry for its annual business plans and various projects, is the largest of the domestic parties that are affected by the ministry’s policy decisions and actions.

After its probe into the officials who were treated to expensive dinners many times by Tohokushinsha Film Corp. executives including Suga’s son, in violation of the ethics code for government employees, the ministry took disciplinary actions, such as pay cuts, against 11 officials involved in the scandal, including Taniwaki.

And the ministry said Taniwaki had not been illegally entertained by any other stakeholder.

In a March 1 Lower House Budget Committee session, Taniwaki himself declared that he had never been entertained by other stakeholders in any way that violated the law.

After the magazine’s new expose, however, Taniwaki, at a March 4 Upper House Budget Committee session, admitted attending the reported eating and drinking sessions with NTT executives. Taniwaki stressed that he did not think he was violating the law because he paid the amount shown by NTT for his share of the expenses and therefore did not report the sessions to the ministry’s secretariat.

Regarding instances where bureaucrats are entertained but paid part of the bills, the ethics code says if their payments fall short of the actual expenses they incurred, they should be regarded as being treated.

Even if bureaucrats pay all the expenses they incurred on such occasions, they are required to notify their organizations in advance when the payments exceed 10,000 yen ($92.65).

Since he has repeatedly claimed that he did not commit any ethical violation in response to questions from ministry investigators and Diet members, Taniwaki should be accused of making false statements if he actually violated the code in any way.

The new revelations have also cast doubt on whether the ministry’s inquiry, triggered by the scandal involving Tohokushinsha, was sufficiently rigorous.

In a March 4 Diet session, some lawmakers called for summoning participants involved to testify before the Diet.

If the claims made by the people involved alone are not sufficient to clarify the facts, the scale and approach to investigating the allegations should be reconsidered.

During his tenures as chief Cabinet minister and prime minister, Suga has repeatedly referred to telecommunications policy issues, such as cuts in mobile service fees.

Taniwaki has served many important posts within the ministry and taken charge of Suga’s signature policy initiatives.

Makiko Yamada, who was handpicked by Suga to become the first woman to serve as Cabinet public relations secretary, and Suga’s oldest son, whom he appointed as secretary while serving as the telecommunications minister, have already become embroiled in the scandal.

Suga should realize that he cannot simply view it or deal with it as a problem for other people.