Experts question timing of new deadline for state of emergency 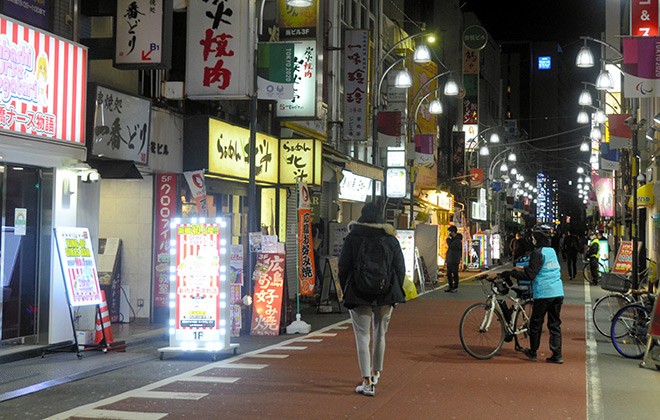 Few pedestrians roam the streets of the Shinbashi entertainment district in Tokyo at around 8 p.m. (Yuji Masuyama)

Government leaders apologized to the public for the extended COVID-19 state of emergency in the greater Tokyo metropolitan area while some experts raised concerns about the timing of the new deadline.

The central government’s panel of experts on March 5 approved the proposal to continue the state of emergency for the novel coronavirus for two weeks for Tokyo and its neighboring prefectures of Kanagawa, Saitama and Chiba beyond the March 7 deadline.

The state of emergency, in place since Jan. 7, is now scheduled to end on March 21 for those areas.

A government task force dealing with the COVID-19 pandemic was to formally approve the decision later on March 5, and Prime Minister Yoshihide Suga was expected to hold a news conference to explain the extension.

“I frankly apologize for reaching the conclusion that there is a need to extend (the state of emergency) for about two weeks because there are still serious barriers existing, such as the tight situation among hospital beds set aside for COVID-19 patients,” Suga said at the Upper House Budget Committee on the morning of March 5.

He added that every effort would be made to contain the spread of infections as soon as possible.

Yasutoshi Nishimura, the state minister for economic revitalization who is in charge of the central government’s effort to deal with the pandemic, said at the experts’ meeting, “The pace at which new infections is decreasing in the greater Tokyo metropolitan area is slowing, and there is a need to ensure that the hospital bed (usage ratio) decreases in a steady manner.”

Health minister Norihisa Tamura also attended the meeting and apologized for causing further trouble to citizens for two weeks. He added that additional steps would be taken for vaccinations and dealing with variant strains of the coronavirus.

Some experts questioned why the extension is for only two weeks.

If the state of emergency is lifted on March 21, there would likely be an increase in gatherings related to personnel transfers at companies in line with the new fiscal year, which starts on April 1, they said.

That period would also coincide with the blooming of cherry blossoms in the metropolitan area. If the state of emergency is lifted, more people could feel it is safe to gather and drink under the flowers.

Other experts conducted simulations of infection trends depending on when the state of emergency is lifted.

The simulation study was conducted by Taisuke Nakata, an associate professor of economics at the University of Tokyo, and Daisuke Fujii, a specially appointed lecturer at the same university’s Economics Faculty.

They also concluded that the extent in which requests are relaxed to shorten business hours and limit audience numbers would be crucial in decreasing the economic impact while restraining new COVID-19 cases.

But extending the state of emergency for two weeks will increase the economic loss by about 160 billion yen ($1.5 billion), equivalent to about 0.16 percent of Tokyo’s gross domestic product.

The economists’ simulation predicts Tokyo will have the most gradual increase in new cases, and the pace will be higher for the other three prefectures.

“Unlike February, when the focus was on whether to lift or extend the state of emergency, the situation has now entered the important stage of risk management,” Nakata said.

He said that would involve coordinating how to relax requests regarding business hours and event audiences while monitoring trends in new COVID-19 cases.

(Hisatoshi Kabata contributed to this article.)