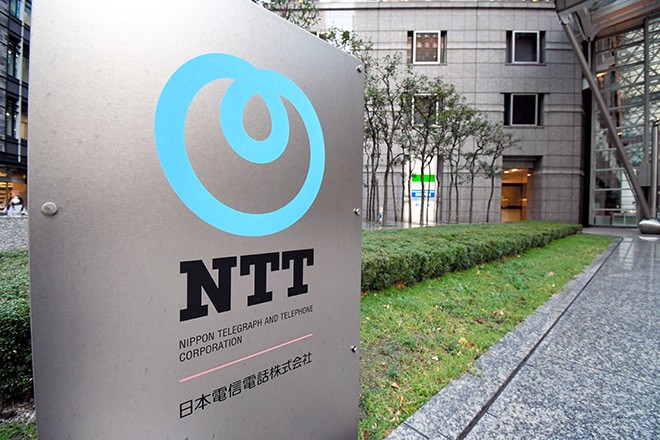 The logo of the Nippon Telegraph and Telephone Corp. (Toshio Tada)

Telecommunications ministry officials once again find themselves investigating possible ethics violations after news surfaced that more policy makers were wined and dined by industry players, this time by the telecommunications giant NTT group.

When the government disciplined 11 ministry bureaucrats on Feb. 24 for being treated to expensive meals by a satellite channel broadcaster, ministry officials believed there were no other cases of bureaucrats being entertained by companies that the ministry oversees.

But then on March 4, Yasuhiko Taniwaki, vice minister for policy coordination at the telecommunications ministry, admitted in the Diet to being treated by Nippon Telegraph and Telephone Corp. executives, and that a new investigation was needed to look into possible rule violations.

Taniwaki was among the bureaucrats disciplined last week for being treated to expensive meals by Tohokushinsha Film Corp. Suga’s eldest son is employed by the satellite broadcaster, making the scandal a bigger headache for the government.

Suga has made lowering mobile phone fees one of his pet policy projects. The telecommunications ministry, which regulates the industry, oversees the fees charged by the major carriers, including NTT Docomo Inc., which is a subsidiary of NTT.

Taniwaki claimed he paid a “fair amount” that NTT officials requested after he dined with Jun Sawada, NTT’s president.

Ministry officials will now have to examine the cost of the meal and how much Taniwaki paid.

The online outlet that broke the story said the top brass had enjoyed the meals at an expensive, members-only restaurant, raising the question of whether he picked up his full tab.

Receiving benefits in the form of meals and drinks would constitute a violation of the National Public Service Ethics Code.

Opposition lawmakers grilled Suga about whether he intended to dismiss the bureaucrat treated to the expensive meals by a policy stakeholder.

Suga only said in response that he would await the results of the ministry’s ongoing investigation.

Yuko Mori, the secretary-general for the opposition Constitutional Democratic Party of Japan in the Upper House, demanded that the ruling coalition allow Suga’s eldest son and NTT’s president to be called to the Diet to testify as witnesses.

“The ministry investigation was wrong,” Mori said. “The telecommunications minister must take responsibility by resigning because his subordinates made false statements in the Diet.”

Even one lawmaker within the ruling Liberal Democratic Party said Suga may have been too protective of telecommunications ministry officials since he once served as its minister.

Ryota Takeda, the current telecommunications minister, said at a March 5 news conference that the government will widen the range of the latest investigation beyond the bureaucrats mentioned in the online article by a weekly magazine publisher.

“I would like to apologize for creating suspicions toward the administrative branch and national civil servants once again,” Takeda said.