Suga: Averting rebound in virus cases key over next 2 weeks 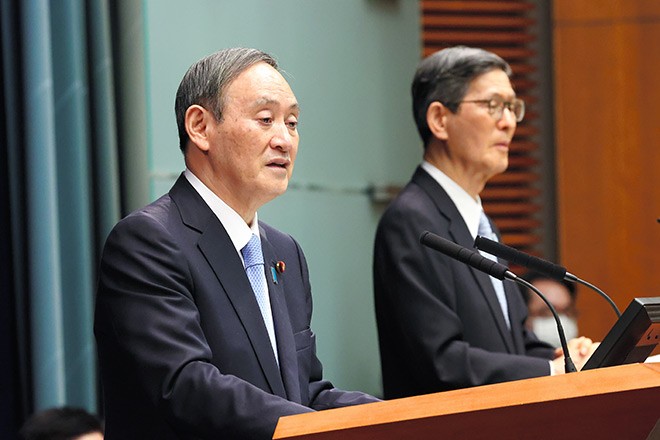 Prime Minister Yoshihide Suga pledged to dramatically expand nationwide vaccinations for COVID-19 by the end of April as the government forges ahead with efforts to prevent a rebound in cases in the greater Tokyo metropolitan area.

Suga, in a March 5 news conference, also apologized for extending the state of emergency related to the pandemic for two weeks for Tokyo and its three neighboring prefectures of Kanagawa, Saitama and Chiba until March 21.

“What I have to do is to prevent a rebound and to allow for the lifting of the state of emergency,” he said.

At an earlier government task force meeting where the formal decision was made to extend the measures originally slated to end March 7, Suga touched upon benchmarks that show the situation at the hospitals treating COVID-19 patients still leave no room for complacency.

Suga said testing for COVID-19 would be expanded to prevent infection clusters by pinpointing the source. The measures will include testing at about 30,000 facilities for senior citizens as well as for those who may not have obvious symptoms in entertainment districts in urban centers.

Describing vaccines against COVID-19 as a “ray of hope,” Suga said vaccinations would be expanded widely by the end of April.

He said a meeting of Cabinet ministers tasked with finding solutions to the health crisis would be held before the end of March to consider steps to support those vulnerable to becoming isolated from the rest of society, such as women in jobs that offer little security and single parents. Those factors are behind a sharp increase in suicides among women.

Shigeru Omi, the chairman of the government’s panel of experts, also attended the news conference along with Suga and stressed that preventing a rebound in novel coronavirus infections is crucial.

“The greater Tokyo metropolitan area has a higher possibility of a rebound than other regions,” Omi said. “Measures will need to be strengthened over the next two weeks to accomplish this.”

In other developments, the governors of the four prefectures that will continue to remain under the state of emergency held a video conference on the afternoon of March 5.

They agreed to ask local residents to refrain from gatherings to enjoy cherry blossoms or attend parties related to personnel transfers around the start of the new fiscal year from April 1. They also agreed to continue with requests to bars and restaurants to close their doors at 8 p.m.

But they could not agree on benchmarks that would have to be met before they asked the central government to lift the state of emergency.

The Tokyo metropolitan government decided not to establish benchmarks due to fears that such a move might tie their hands when the time came to make a decision.

Kanagawa Prefecture decided not to set up benchmarks, but Saitama Prefecture came up with its own criteria, while Chiba Prefecture said it would refer to the six benchmarks established by the central government’s panel of experts.

One member of that panel admitted that it was difficult to come up with new measures to help stop the spread of new infections because it remains unclear why the pace of decrease in new cases has slowed.