Scars on reactor building testify to ferocity of 3/11 disaster 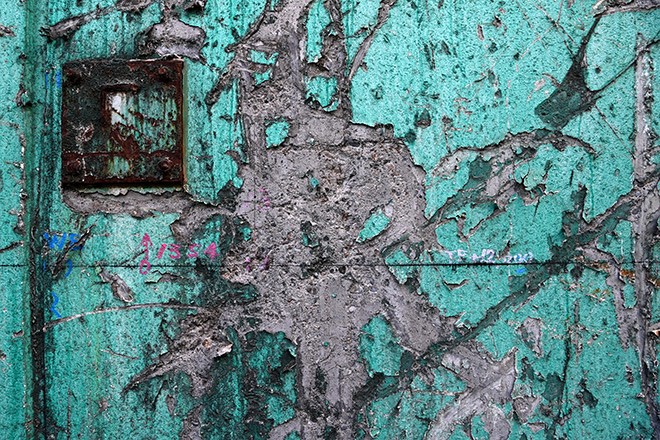 The north wall of the No. 3 reactor building of the Fukushima No. 1 nuclear power plant on Feb. 1. On the wall retains marks left by the 2011 tsunami and agents sprayed to prevent the spread of radioactive substances after the accident. (Shinnosuke Ito)

Parts of the Fukushima No. 1 nuclear power complex still bear scars from the tsunami generated by the Great East Japan Earthquake that knocked out cooling systems and triggered a triple meltdown.

Ten years after the nuclear disaster, the decommissioning process is under way at many parts of the coastal facility. However, many signs of the event are still visible, a reminder of the formidable challenge of dismantling the crippled reactors.

For example, the north wall of the No. 3 reactor building is littered with numerous marks left by agents sprayed to prevent the spread of radioactive substances, along with figures and signs jotted down in a survey after the accident.

Reporters allowed a glimpse of the stricken facility on Feb. 1 encountered numerous indications of the tsunami that rose up to 15 meters in height.

The government and plant operator Tokyo Electric Power Co. in 2011 set a goal of completing the decommissioning by 2051.

But studies have yet to be fully conducted over precisely where and how much melted nuclear fuel lies inside the reactors. This is due mainly to the amount of debris and high radiation levels.

The utility announced in December that work to start retrieving the nuclear debris would be delayed by one year from 2021.

While the government and TEPCO are still sticking to the 2051 goal, they have not determined details of the end state of decommissioning.