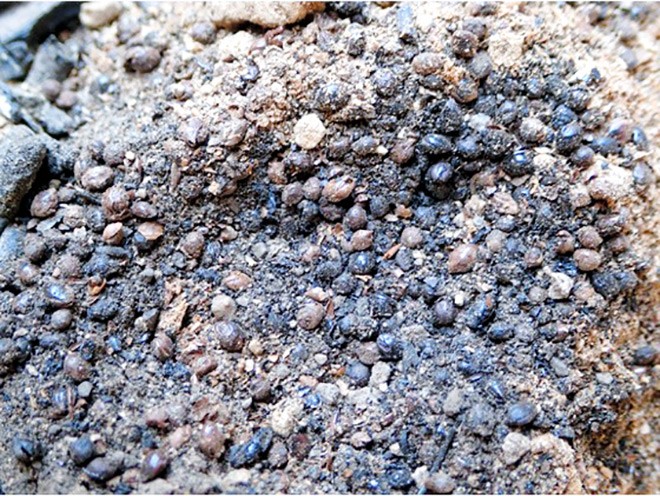 Grains of foxtail millet were found in a charred state in a pantry excavated at the Kafir Kala fortress in Samarkand, Uzbekistan. (Provided by Tezukayama University)

NARA--An eighth-century pantry unearthed in the ancient Silk Road city of Samarkand suggests the influence of Eastern and Western dietary cultures on the dinner table of a Sogdian king, archeologists said.

The remains of the pantry were found in Kafir Kala, a fortress 30 kilometers to the southeast of central Samarkand, during an excavation by institutions including Tezukayama University in Nara and the National Museum of Ethnology in Suita, Osaka Prefecture, in September 2019.

A trade base and a military strongpoint along the Silk Road, Kafir Kala is believed to have served as a detached palace for the king. The pantry, 3.1 meters wide and 11.2 meters from front to back, was located close to the throne.

According to the findings about the excavation announced here in March, charred grains of foxtail millet, which was broadly eaten in East Asia, and a carbonized substance that was likely honey, which was much loved in Greek civilizations, were discovered in the pantry.

“The site was a key stop along the Silk Road, and the culinary culture there is testimony to East-West exchange,” said Takao Uno, a guest professor of archaeology with Tezukayama University, who was involved in the dig. “That’s why our study is significant.”

Uno said porridge made of foxtail millet was likely served at royal banquets and that the grains may also have been eaten in the form of dumplings with honey on it.

Today, people in Uzbekistan also eat foxtail millet porridge, which is cooked with garlic, beans and other ingredients, he said.

Charred beans and garlic were also found in the pantry at Kafir Kala, which means the fortress of infidels.

Thirteen large earthen pots, about 1 meter in height, which likely contained wine and olive oil, were discovered along a wall.

Apart from earthenware, the researchers unearthed a decorated wooden bowl likely used to carry nuts, such as walnuts, which Uno said may have been served as snacks to go with alcohol.

The ruins of the pantry were located in a layer of soil razed by fire. The complex was likely burnt when the Umayyad dynasty of Arabs attacked Central Asia.

A similar pantry has been discovered in the Cretan civilization in the Aegean Sea. The Cretan pantry was also found close to a throne, Uno said.

Tezukayama University has released an artist’s rendition of an imagined scene from a royal banquet based on available materials, including Chinese murals with images of Sogdians.

The illustration shows the king and his retinue eating foxtail millet porridge and dumplings in the presence of musicians playing instruments and a dancer.