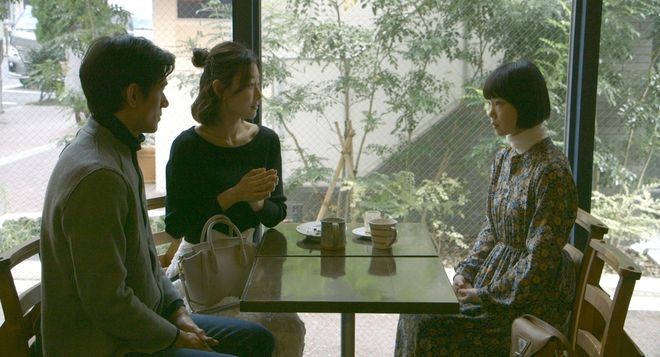 Ryusuke Hamaguchi is attracting global attention as a next-generation leader in Japanese cinema.

The director received the Silver Bear Grand Jury Prize at the 71st Berlin International Film Festival, one of the world's three major film festivals, for his "Wheel of Fortune and Fantasy."

"I am surprised because I didn't expect or anticipate that it would be included in competition or even win an award," Hamaguchi said.

He made the remark during an online news conference on March 6, the day after he won the Silver Bear for Best Film, the second-most prestigious prize after the Golden Bear.

The dialogue-centered stories are about an unexpected love triangle, a seduction trap and an encounter resulting from a misunderstanding.

A jury statement made by six directors who are past Golden Bear winners said that the dialogues and words in the film open up a new place.

“As if, the place begins to change as the actors utter words," Hamaguchi said, referring to the statement. "I feel that it made a difference as a work of cinema."

"Wheel of Fortune and Fantasy" has drawn rave reviews at home and abroad. It shares the top spot on the film magazine Screen's jury grid for 15 works submitted in competition at the Berlin festival.

It is the actors' performances, the director believes, that makes the highlight of the film and his unique directional technique, known as "Hamaguchi method," helps bring out their full acting potential.

The director has actors read their lines aloud repeatedly with no emotions before they create their characters, basing them on their own interpretations and playing them with emotions for a take.

"When you memorize your lines so completely that you can deliver them automatically, it gives depth to the voice," Hamaguchi said. "What had been something emotionless comes out as something fresh while they are acting."

Hamaguchi places importance on taking time with actors and coming face to face with them when he works on a project because he believes that the more time he spends with them, the better the film will become.

He intends to develop the three-episode film into a seven-episode series.

His latest feature film, "Drive My Car," starring Hidetoshi Nishijima, is based on a short story of the same name by Haruki Murakami. It comes out this summer.

(This article was written by Misuzu Sato.)

Hamaguchi studied at Tokyo University of the Arts (Geidai) Graduate School of Film and New Media, which was founded in 2005. He studied under director Kiyoshi Kurosawa, a professor for the course.

In an interview with The Asahi Shimbun, Kurosawa talked about Hamaguchi's artistic vision.

Question: What qualities do you find in Hamaguchi as a student and a young director?

Kurosawa: He is a rare filmmaker in Japanese cinema who creates dramas with thoroughly crafted dialogues and editing techniques. In Japan, normally, more importance would be placed on "pause," "emotion" and "pathos." It would be "action" for American cinema. French cinema has some of those qualities, but at any rate, he is very unique in the world.

Q: Did he develop those qualities while studying at Geidai?

Kurosawa: No. Hamaguchi had those qualities even before he was enrolled. But I think he became confident in these filmmaking techniques after he made "Sound of Waves" and other documentary films about the Great East Japan Earthquake.

Q: What does Hamaguchi's success mean to Geidai?

Kurosawa: Hamaguchi is inherently a talented director. All Geidai did was give him a little boost to let the world know his talent. I think the fact that he made various efforts after he graduated has played a more important role in shaping his career today. I haven't seen "Wheel of Fortune and Fantasy" that won the award at Berlin this year, so I can't say anything about it.
But I see names like Kiyohiko Shibukawa, Fusako Urabe and Aoba Kawai in the cast, and they were the main cast members of Hamaguchi's graduation project at Geidai, "Passion." When I see traces scattered here and there in the film indicating how he developed the film using Geidai as a foothold, I can't help but grin.

(This interview was conducted by Noriki Ishitobi, a senior staff writer.)