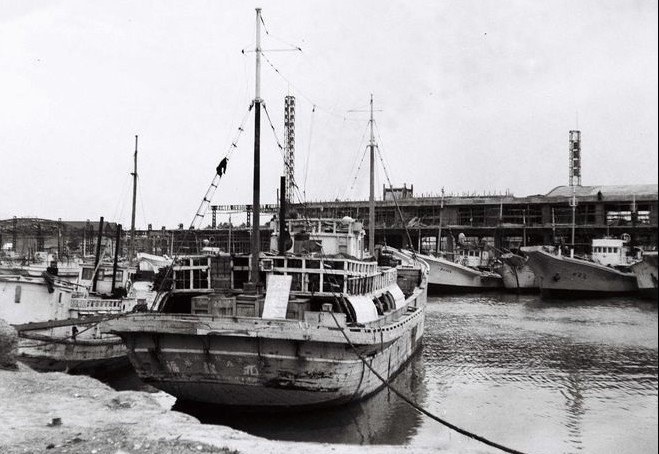 The tuna fishing vessel Daigo Fukuryu Maru returns to its home port in Shizuoka Prefecture after being exposed to radioactive fallout from the U.S. hydrogen bomb test in 1954. (Asahi Shimbun file photo)

The 1954 U.S. hydrogen bomb test over Bikini Atoll in the Marshall Islands made poet Baku Yamanokuchi (1903-1963) choose tuna as a medium to vent his fury against nuclear weapons.

Titled "Maguro ni Iwashi" (Tuna and sardines), the poem goes, "We are all tuna on this earth / Tuna detest atomic bombs / But are again threatened by hydrogen bombs / Tuna are living in the present in a fit of anger.”

The tuna fishing vessel Daigo Fukuryu Maru was sailing off Bikini Atoll in the Pacific Ocean, far from its home port in Shizuoka Prefecture, when it was exposed to lethal fallout from the U.S. thermonuclear test.

It was nine years after the atomic bombings of Hiroshima and Nagasaki, and the Cold War-era terror of nuclear warfare gripped the nation.

The effects of the hydrogen bomb test reached other vessels as well, leading to a nationwide abstention from eating tuna.

As others of the vessel’s 23-member crew continued to succumb at relatively young ages, Matashichi Oishi became a vocal anti-nuclear activist.

“Shi no Hai wo Seotte,” a book in which Oishi recounted his exposure to “shi no hai” or lethal radioactive fallout, depicts the moment of the thermonuclear blast.

He saw an ominous flash on the horizon and immediately heard a thunderous roar. Then, “white powder” started falling from the sky, filling his eyes, ears and nostrils mercilessly.

After about three days, the crew’s faces turned dusky, and their hair started falling out.

Oishi left his native Shizuoka Prefecture for Tokyo, practically fleeing from the discrimination and jealousy he faced from his neighbors for the monetary compensation he received for his plight.

After many years of silence, Oishi started recounting his experiences in public at the request of a junior high school student.

“I cannot possibly bear my anger about my exposure to the radioactive fallout, nor my pain and sorrow over the loss of my friends and colleagues,” he told his young audience, and started championing the elimination of nuclear weapons.

The nuclear threat is a bit like air, in that it is easy to forget its existence.

But so long as nuclear weapons continue to exist, how different are we, really, from the irradiated crew of the Daigo Fukuryu Maru and the tuna?