Graduation of one: School bids a fond farewell to its final student 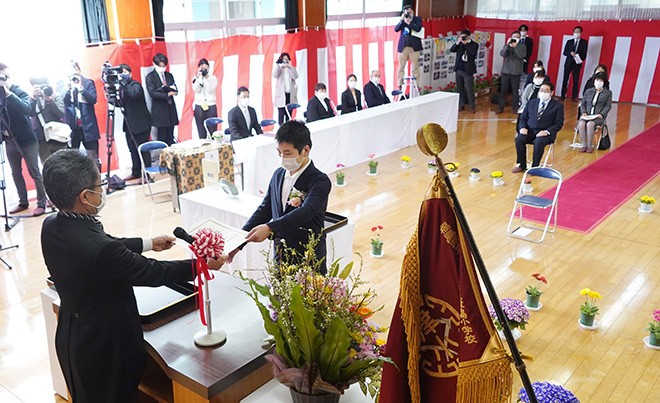 NIHONMATSU, Fukushima Prefecture--Yoshito Sudo was the only remaining student attending his local elementary school, in a class of one.

But thanks to the strong support he received from his community, Yoshito, 12, never felt his school life was solitary.

“I was the lone student at school, but I did not feel the least bit lonely,” Yoshito said in a speech at Tsushima Elementary School’s graduation ceremony on March 23. “It is because every one of you cheered me on and watched over me.”

The newly minted graduate received warm applause from about 30 attendees--teachers and residents who packed the school hall.

The school was originally located in a mountain village home to about 1,500 residents in Namie, Fukushima Prefecture.

It stood about 30 kilometers northwest of the crippled Fukushima No. 1 nuclear power plant.

When the 2011 Great East Japan Earthquake, tsunami and nuclear disaster hit the region, 58 children were attending school there.

But authorities deemed the area a “difficult-to-return” zone, and the students were separated. An evacuation directive is still in place.

Three years after the disaster, the school reopened at a temporary campus in the neighboring city of Nihonmatsu.

Children from other schools, as well as those who felt out of place at schools where they were considered refugees, joined the temporary campus.

It started with about 20 students, but the number gradually declined.

Yoshito was the only student left in fiscal 2020, which comes to a close at the end of March. He is also the last ever to graduate from Tsushima. The school will shut down this spring.

Seven teachers and school staffers did everything they could to make Yoshito’s school life positive and meaningful.

They called themselves “Team Yoshito.” They played volleyball with him during lunch breaks and supported him in cooking class.

A group of evacuees that supports the school participated in many of its activities and helped tend to the school garden.

About 65 people, including former students of the school, attended its athletic festival in fall 2020.

“The school has no worth without the community,” said Yuichi Harada, 71, who heads the support group.

Its closing makes evacuees from Namie like him feel sad, Harada said.

“We could feel a sense of security that the community was surviving as long as we had a school for children from Namie,” he said.

Fujio Sano, 65, a school custodian, also took a moment to lament the school's fate, but then quickly beamed with pride.

“It is sad that my alma mater is closing while everybody is dispersed due to the nuclear accident,” Sano said.

“But it was awesome that I could be there to send off the last graduate,” he added with a smile.

Starting in April, Yoshito is expected to attend a junior high school with 300 students in the city of Fukushima, not far from where he currently resides.