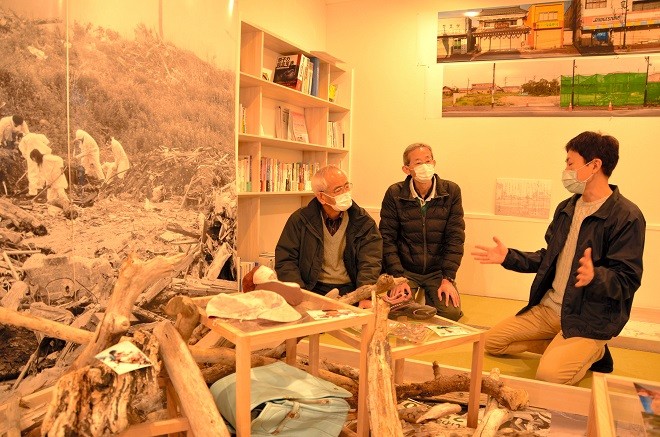 Yoshio Satomi, right, director of the Genshiryoku Saigai Koshokan museum, speaks to visitors in Iwaki, Fukushima Prefecture, on March 12 in front of a display made of debris and personal possessions of the dead. The exhibit is intended to show how evacuees were forced to give up searching for missing people after the 2011 nuclear crisis unfolded. (Shoko Rikimaru)

IWAKI, Fukushima Prefecture--A hot spring inn here opened a museum about the Fukushima nuclear disaster to pass down lessons from the crisis and heal rifts that may have developed.

Local volunteers started the Genshiryoku Saigai Koshokan museum, which opened within the Furutakiya ryokan on March 12, a day after the 10th anniversary of the Great East Japan Earthquake and tsunami that caused the accident at the Fukushima No. 1 nuclear power plant.

Admission is free for everyone, not just guests.

“A lack of imagination could lead to friction between urban and rural areas or between evacuees and other citizens,” said Yoshio Satomi, 52, director of the museum and manager of the ryokan in the Iwaki’s Jobanyumotomachi district. “I want people to rethink the nuclear disaster together here.”

The displays include a light blue “randoseru” school backpack and muffler among driftwood. They were the personal belongings of a girl who was killed in the tsunami.

A photo showing people in protective wear removing debris was provided by a man who lost a family member in Okuma, Fukushima Prefecture. The image gives viewers a look at how the nuclear disaster made it much more difficult to find survivors of the natural disasters.

An exhibition panel is covered with photos snapped at intervals of several years from the same point, showing the demolition process of a shopping street in Namie in the prefecture.

The picture board also features a series of tanka written by a poet to express her feelings for her hometown. Her family ran a bicycle shop in the shopping area shown in the images.

Each building in the photos allows visitors to imagine the lives of residents who used to spend their days there.

The museum, about the size of 20 tatami mats, was converted from a banquet hall. Videos of interviews with those who have offered support for its opening are also available at the museum.