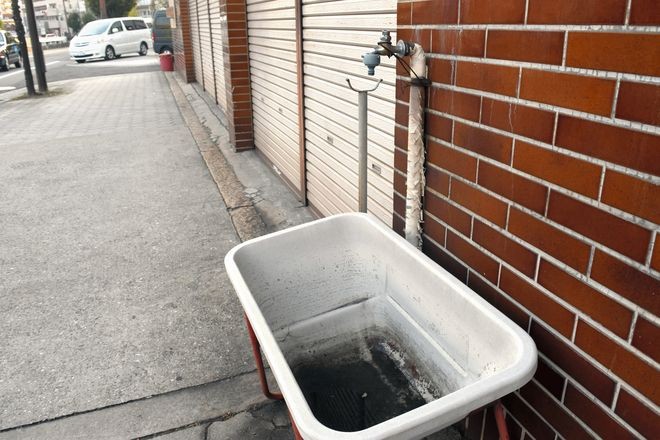 A water tap was left open for nearly six hours in front of a plant in Osaka’s Sumiyoshi Ward. (Kota Kawano)

OSAKA--A neighborhood here was baffled by a string of incidents involving outdoor faucets being left open for hours. Police tracked down a suspect, and his stated motive also led to some head-scratching.

But perhaps most perplexing for investigators was what charge to pursue against the suspected serial water-waster.

On a morning in mid-October last year, a worker in his 50s arrived at a factory in Osaka’s Sumiyoshi Ward and found an outdoor tap spewing out water.

Osaka prefectural police said security camera images and other evidence showed the tap had been left open for nearly six hours, wasting about 1,860 liters of water--enough to fill seven to eight bathtubs.

It was not an isolated incident.

“Water was left running in the morning on three or four occasions since October last year,” the factory worker said. “It was really troublesome because it resulted in increased water bills and inundation of surrounding streets.”

Around the same time, police received a similar complaint from another business operator.

After interviewing nearby residents, police found nine cases of opened taps in Sumiyoshi Ward and neighboring Suminoe Ward in October and November last year. The gas was turned off at two sites as well.

According to an official of Osaka city’s waterworks bureau, periodic meter inspections occasionally uncover water leaking from pipes, but “few reports” have been made about water intentionally being let out.

The Sumiyoshi Police Station examined security camera footage of the scenes and discovered the same man at more than one location.

A “relay-style” approach using camera footage led police to a male resident of Suminoe Ward in his 60s. During voluntary questioning, he essentially admitted to his involvement in the water-leak cases, police said.

“I did it because I was annoyed that the faucet at my home was left running in the past,” they quoted him as saying. He also reportedly said he “felt refreshed and intoxicated by opening” another person’s tap.

However, officers could not arrest him on suspicion of trespassing because the outdoor taps were opened from the outside of private property. He also did not take any water away with him so his actions could not be regarded as thefts.

After thorough discussions, the police station on Jan. 20 sent papers to prosecutors on the case at the factory involving the 1,860 liters of wasted water.

The suspect was accused of violating Article 261 of the criminal law, which states, “A person who damages or injures property … shall be punished by imprisonment with labor for not more than three years, a fine of not more than 300,000 yen ($2,754) or a petty fine.”

CHARGE MAY NOT APPLY

Takaaki Matsumiya, a criminal law professor at Ritsumeikan University’s School of Law, noted that “property damage” in the article can cover a range of “acts resulting in the loss of the properties’ vital functions.”

In past trials, penalties were imposed on a person who opened a floodgate to drive away carp from another individual’s pond. Another suspect was convicted on the charge for urinating into a sukiyaki pot at a restaurant.

The Sumiyoshi Police Station deemed the wasted water was the “property” of the plant, and that leaving the tap open “led to the loss of the water’s functions.”

However, even legal experts are not sure if faucet water can be classified as “property.”

The Osaka city government purifies water from the Yodogawa river for distribution to households under contract.

“We recognize water as the property of the customer after it passes by the water meter, but I have no idea about whether the water legally belongs to the person,” the municipal waterworks bureau official said.

Matsumiya said it was “reasonable to think that the suspect’s mischief should be prosecuted.”

“Water in vessels can highly likely be deemed property, but whether piped water is covered by the right of ownership is unclear,” the professor said. “The suspect in the latest case should have been blamed for having interfered with the business.”

Takeshi Nakano, an administrative law professor at Kyoto University’s School of Law, said “a continuous stream of water in pipes--like that in rivers--could be considered a part of personal property” only under specific conditions.

“It must be confirmed that the victim had a solid intention to use water in supply pipes or elsewhere at the factory,” Nakano said.

The Osaka District Public Prosecutors Office on March 1 decided not to indict the suspect.
His actions caused damage totaling hundreds of yen at most, and prosecutors apparently concluded no punishment was necessary, even though he was suspected of committing a crime.

Police were not pleased with that decision.

“Leaving such a nuisance untouched may lead to damage to far more people,” said a senior official of the Sumiyoshi Police Station. “We sent papers on the case to prosecutors partly to eliminate the anxiety of residents in the local communities.”

A CAP ON MISCHIEF

The designs of many outdoor faucets require a specialized tool for opening. But the tool is commercially available, and the water-wasting suspect had obtained one.

“It is difficult to take measures to prevent all those cases, and the only possible approach is stop water as soon as leaking is found,” the waterworks bureau official said. “We would like those responsible for the taps to frequently check them.”

Kakudai MFG. Co., a plumbing tool maker and seller in Osaka, has offered a solution. Its cap covers the entire tap and comes with a dedicated key to prevent misbehavior, water larceny and other crimes, according to company officials.

The equipment is reportedly available at local waterworks companies and other places.

(This article was written by Issei Yamamoto and Kota Kawano.)