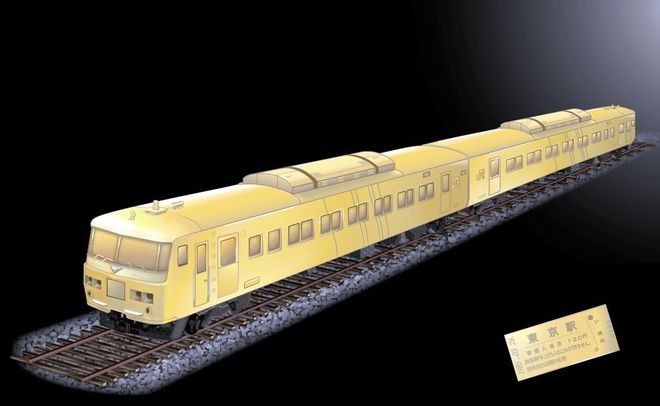 An artist’s rendition of the pure gold replicas of the 185 series train and the station entry ticket (Provided by East Japan Railway Co.’s Tokyo branch)

Train buffs mourning the retirement of the 185 series train operated by East Japan Railway Co. can now purchase a miniature replica in pure gold--if they have 10 million yen ($91,510) to spare.

The price includes tax and orders will only be taken until April 30.

JR East said it decided to commemorate the train introduced in 1981 by the former Japanese National Railways after fans clamored for some sort of keepsake.

“The 185 series train was a mainstay until the end. As a limited express train dating from the era of the JNR, many of our patrons lamented its passing,” said a representative of JR East’s Tokyo branch. “We wanted to celebrate its retirement with a train model made of gold.”

The 185 series train ran as the Odoriko limited express on the Tokaido Line and was withdrawn from regular service on March 12.

According to JR East, the two-car replica model will come with a replicated entry ticket with “Tokyo Station” inscribed. It is the first time for the company to market a pure gold model of a retired train. Sales kicked off March 18.

The company admitted it won't be able to gauge demand until sales, which are made to order, are in full swing.

Orders can be made on JR East’s shopping site JRE Mall through April 30. Customers can expect to receive their orders two months later.