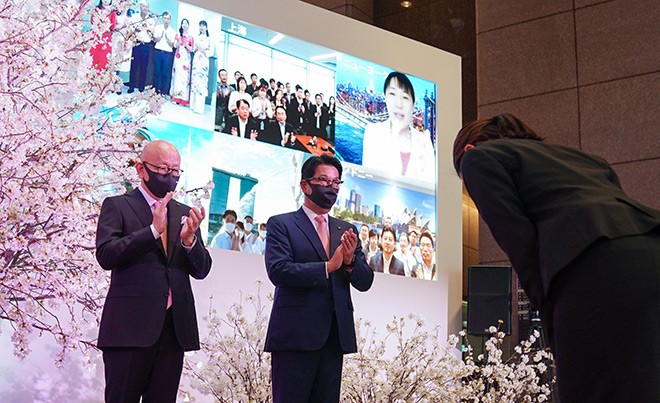 Itochu Corp. Chairman Masahiro Okafuji, left, and President Keita Ishii, center, welcome new recruits with applause along with company employees from around the world watching on the screen in Tokyo’s Minato Ward on April 1. (Ryo Kato)

About 120 new employees of major trading house Itochu Corp. were treated to cherry blossom viewing on April 1 as they started their first day on a new fiscal year.

And they didn't even have to leave the company headquarters in Tokyo's Kita-Aoyama district to enjoy the view.

At the entrance on the first floor, red carpets were rolled out and about 300 sakura trees in full bloom were put on display.

The first day of April is normally a day of celebration in Japan, marking the beginning of a new phase in life for those who recently graduated from a university and are embarking in the workforce.

Okafuji came up with this surprise event to encourage new employees amid the novel coronavirus pandemic last year.

The trading company canceled its welcoming ceremony where all new employees gather together for the second consecutive year as an anti-virus measure.

Instead, the company installed two giant monitors to provide an online connection with 12 offices abroad.

The overseas employees appearing on the screens also greeted the new recruits with applause.

About 90 employees appeared on the screens, including an employee working in Dubai and wearing attire common in the Middle East and an employee holding pineapples at a farm in the Philippines.

“I understood that the employees are actively working all over the world,” a new male employee said.

The Yoshino cherry blossom trees were planned to become in full bloom on April 1.

“A welcoming ceremony is held once in a lifetime for new employees, so I would like to make it memorable,” Okafuji said. “This is my parental feeling.”

Meanwhile, other companies also held welcoming ceremonies on the day.

Last year, many of the ceremonies were held online, but some of the companies chose to hold in-person events this year.

An official of East Japan Railway Co. said, “We would like new employees to feel a sense of unity with other new recruits this year.”

On the other hand, home builder Sekisui House Ltd. canceled its in-person welcoming ceremony for the second year in a row, “to prevent infections from spreading.”

(This article was written by Masaki Hashida and Osamu Uchiyama.)