Number of kids under age 5 who are stateless in Japan up 3.5-fold 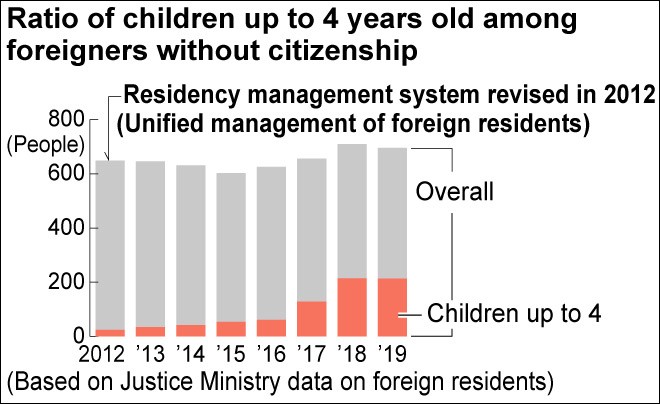 The number of stateless children in Japan under 5 years old has jumped approximately 3.5-fold in the three years until the end of 2019.

A total of 213 children under 5 without any form of citizenship were residing in Japan as of the end of 2019, rising to 217 as of the end of June 2020, according to Justice Ministry statistics.

Many of them have been left stateless because foreign workers and students living in Japan did not complete the necessary procedures to obtain citizenship for their offspring.

Foreign parents must register the birth of their children with their embassy or consulate in Japan for their children to also obtain citizenship of that nation.

But some foreigners who have overstayed their visas abstain from registering the births for fear of being found out and some nations do not grant citizenship to children born out of wedlock.

According to organizations that provide support to such families, many children who do not have citizenship have been put in that situation because it is uncertain who their father is or because their Japanese father did not acknowledge paternity.

The Justice Ministry keeps statistics on the residency status of all foreigners. Between 2012 and 2016, there were between 20 to 70 stateless children under 5 living in Japan each year. But the figure increased to 128 in 2017 and topped 200 the next year.

“The number of foreigners acknowledged as stateless under the residency management system is only the tip of the iceberg," said Mizue Tsukida, professor emeritus of social welfare at Showa Women’s University.

"While some people may think the situation cannot be helped if the parents are visa overstayers, the children are not responsible for their situation. Efforts should be made to give them citizenship as a right available to all people so the children can be brought up in a stable environment.”

Mieko Ishikawa, general director of International Social Service Japan, a social welfare organization that works with stateless children, pointed out that the diversity of foreigners now living in Japan has meant more are from South Asia.

“Some nations in that region do not approve of granting citizenship to children born out of wedlock,” Ishikawa said.

There have also been cases of individuals reaching adulthood without realizing they were stateless. Those in that spot face even higher hurdles for obtaining citizenship.

A 31-year-old woman living in the Tokai region only realized she did not have citizenship when she was in her 20s.

While her father was Japanese, her mother was Filipina. She was born and raised in Japan so she never doubted she was a Japanese citizen.

But her parents never officially married, partly due to fears the mother might be deported because she entered Japan illegally. The parents also did not register the woman’s birth with the local government office.

With the father unable to acknowledge paternity, the woman’s mother died when she was 14.

Though the woman did not have a residency register, her father consulted with local government officials to allow his daughter to attend public schools until senior high school.

While the woman could have obtained residency status based on her father’s testimony, she decided to obtain Philippine citizenship. But the consulate asked that she provide documents to show that her mother was a Filipina.

However, the woman did not know any of her mother’s relatives in the Philippines and her father also died six years ago.

The woman began dating a Japanese man and became pregnant. However, not only was she unable to obtain the documents for a legal international marriage, but the man’s family also opposed the marriage so she left him.

But that left her daughter also without citizenship.

The woman is now seeking to obtain Japanese citizenship through the support of a private-sector organization and lawyers.

She said many people likely give up obtaining citizenship before they can come in contact with those knowledgeable about such procedures.

Hajime Akiyama, an assistant professor of international law at the University of Tsukuba, said another problem complicating the issue of citizenship is the lax handling of residency cards for foreigners.

In many instances, a child has his or her mother’s citizenship listed as their citizenship on their residency card even though the child’s birth has not been properly reported.

“The Justice Ministry should only include citizenship after it has confirmed with the nation in question that the child has been registered as a citizen of that nation,” Akiyama said.

Some experts point to a 1995 Supreme Court ruling as offering a glimmer of hope for stateless children seeking to obtain Japanese citizenship.

One section under Article 2 of the Nationality Law states that a child can obtain Japanese citizenship if “born in Japan and both of the parents are unknown or are without nationality.”

Mai Kaneko, senior legal associate at the Tokyo office of the U.N. High Commissioner for Refugees, said that legal provision was not widely known by administrative agency officials or lawyers.

“Japan’s Nationality Law is actually quite advanced for Asia,” Kaneko said. “The situation could improve if that provision was understood more widely and used.”

(This article was written by Mari Fujisaki, Hiroki Koike and Eiji Zakoda.)