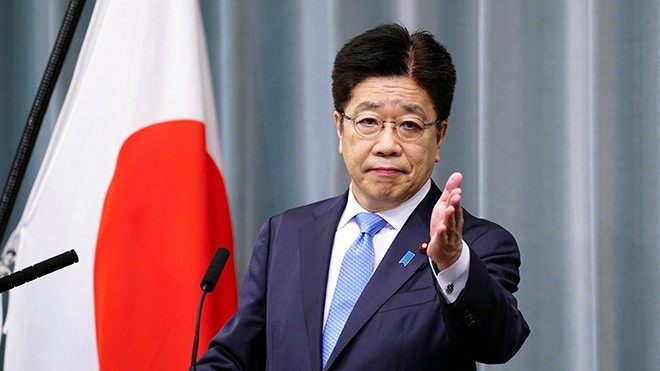 Japan said its policy toward North Korea remains unchanged after the country reportedly announced it will skip the Tokyo Summer Olympics to protect its athletes from novel coronavirus infections.

Chief Cabinet Secretary Katsunobu Kato said at an April 6 news conference that he has “known about the media reports” concerning Pyongyang’s announcement made through an article published on April 5 on a website managed by North Korea’s sports ministry.

“But this is a matter for the International Olympic Committee and the Tokyo organizing committee to first make an adjustment,” Kato said. “We will continue to pay close attention to it.”

Kato said the Japanese government “will continue to make efforts to improve the environment for many countries and areas to be able to participate in the Tokyo Games, including infection control.”

The Japanese government on April 6 adopted a resolution at a Cabinet meeting to extend its sanctions against North Korea for two years.

Those sanctions, including an embargo on North Korean vessels and a blanket ban on trade with North Korea, will expire on April 13. They were imposed over North Korea’s provocations and its abductions of Japanese citizens in the 1970s and 1980s.

Kato said Japan’s policy toward North Korea will not be affected by Pyongyang’s decision to miss the Tokyo Olympics scheduled to start in July.

“Regarding the abduction issue, the government will make proactive efforts,” the chief government spokesman said. “We are also ready to talk. There is no change in our stance.”

Prime Minister Yoshihide Suga did not respond to questions from reporters about North Korea’s decision at the prime minister’s office.