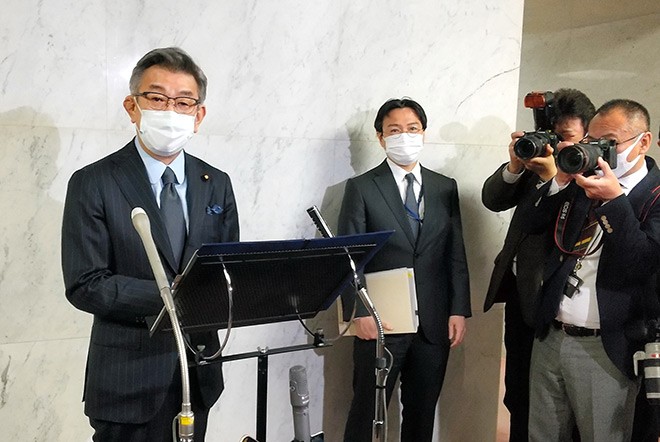 The telecommunications ministry is launching a sweeping investigation of Fuji Media Holdings Inc. for suspected violations of foreign capital regulations under the Broadcasting Law.

Ryota Takeda, who heads the ministry, announced that he had ordered the probe at a news conference on April 6.

“I have ordered officials (at my ministry) to conduct a thorough investigation on the Fuji Media Holdings issues,” Takeda said. “We will look into the matter and address it sufficiently.”

At Fuji Media Holdings, foreign ownership is suspected to have topped the 20-percent ceiling for two years through September 2014, according to sources.

Under the Broadcasting Law, a broadcasting business is not certified as such if foreign shareholders own 20 percent or more of its voting rights, and the telecommunications minister must cancel its certification.

Other broadcasters also “need to be checked for whether they are complying with the foreign capital regulations properly,” Takeda said.

The ministry sent written requests dated April 6 to about 600 companies that asked them to check if they were in compliance with the regulations by the end of the month.

Fuji Media Holdings discovered through an internal investigation in 2014 that it may have temporarily violated the regulations, but did not publicly announce the possible breach.

Whether the broadcaster reported the matter to the telecommunications ministry at that time is also becoming a center of attention.

A ministry official said at a Lower House internal affairs and communications committee session on April 6 that they will investigate further on whether the reports were made to the ministry.

Fuji Media Holdings is a certified broadcast holding company under the Broadcasting Law.

Takeda on April 6 gave no concrete comment on canceling the certification given to the company, saying only he "wasn't yet aware of all the details."