Japan: No talks with U.S. side on joint boycott of Beijing Olympics 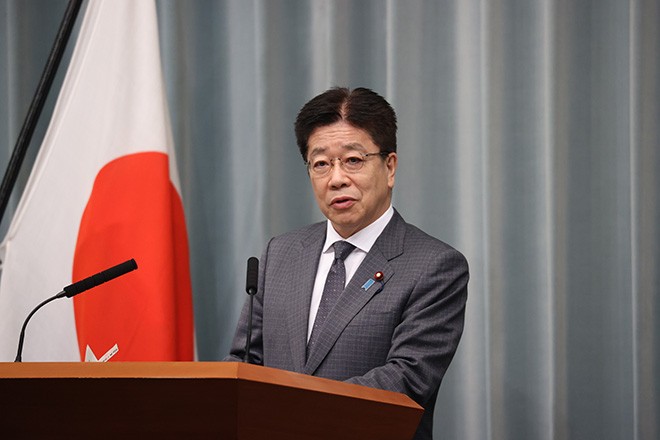 Japanese officials played down a U.S. suggestion for a joint boycott of the 2022 Beijing Winter Olympics, but a sense of nervousness and anger spread among Tokyo Olympic organizers and Japanese athletes.

“I believe that there is no such communication between Japan and the United States (about a joint boycott),” Chief Cabinet Secretary Katsunobu Kato said at a news conference on April 7. “I think that the United States is on the same page as us.”

A U.S. State Department spokesman had mentioned the possibility of boycotting the 2022 Games as a way to deal with China’s human rights abuses.

If that scenario unfolds, the Tokyo Olympics scheduled to open this summer would likely be affected.

Another Japanese government official said the suggestion of the boycott “was intended to keep China in check” and that the idea won’t develop further. The official also said Japan as of now does not need to take any specific actions concerning the Beijing Olympics.

But other Japanese government officials are still concerned, particularly with Prime Minister Yoshihide Suga set to visit the United States on April 16 for a summit with U.S. President Joe Biden.

A senior official at the prime minister’s office voiced hope that the boycott issue would not be raised if the talks turned to the issue of China, especially its oppression of Uighur Muslims.

“We are now preoccupied with our efforts to produce a successful Tokyo Olympics,” the official said.

When Chinese Foreign Minister Wang Yi visited Japan in November last year, Japan and China confirmed that they would cooperate to make both the Tokyo and Beijing Olympics successful.

Yasuhiro Yamashita, the Japanese Olympic Committee chairman and an Olympic judo gold medalist, said he had heard about the boycott suggestion, “but our policy won’t be changed at all.”

“We have been preparing to join the Beijing Olympics,” he said in Tokyo on April 7. “As many countries as possible should participate in the Olympics.”

Yamashita could not join the 1980 Moscow Olympics because of a U.S.-led boycott over the Soviet Union’s invasion of Afghanistan. Four years later, the Soviet Union led a boycott of the Summer Olympics in Los Angeles.

Yuji Takada, a JOC board member and former wrestler, was also forced to give up his chance at glory in the Moscow Olympics.

“A boycott did not solve anything, and the only victims were the athletes,” he said. “The United States and China should not use the Olympics for their power games.”

Officials of the Japan Skating Federation and Ski Association of Japan declined to comment on the issue.

But one skier who is aiming for an Olympic berth said competitors already have enough on their plate.

“Athletes are worried because of the limited training environment amid the COVID-19 pandemic, but everybody is still trying hard for the Olympics,” the skier said. “I don’t want anybody to easily say ‘boycott.’”

The skier added: “As an athlete, I can do nothing about it. What I can say is that I will not be swayed by this issue and will prepare the best that I can on the assumption that the Olympics will be held.”

(This article was written by Dai Nagata and Hideaki Kato.)