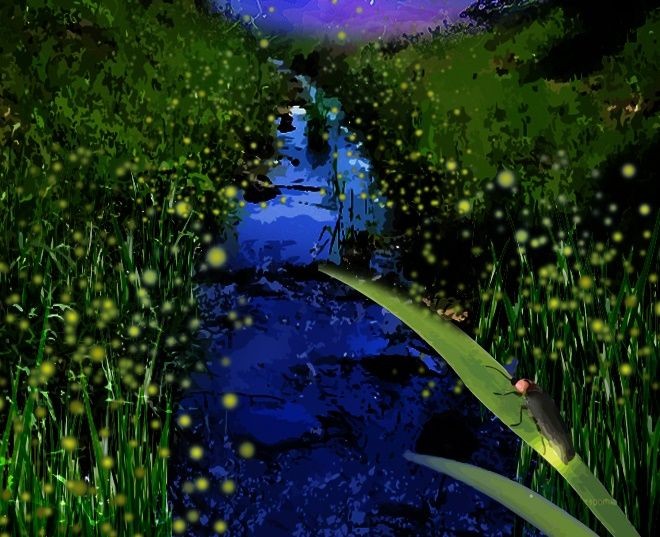 flits the firefly of my mind to touch the ether
--Neena Singh (Chandigarh, India)

Sound of washing machine
as I watch the play--
the show must go on(line)
--T.D. Ginting (Murakami, Chiba)

lockdown,
from one balcony to another
the honeysuckle
--Leticia Sicilia (Canary Islands, Spain)

unicorn day--
a walk in the forest
with a deer
--Olivier-Gabriel Humbert (Les Avenieres, France)

The haikuist’s family played under constellations. Fireflies in Sri Lanka glow green or yellow to communicate; larvae glow in the dark to stay safe from predators. Masumi Orihara was moon-viewing on a lake in India; in rhythm with the creaking oars she “was lucky enough to see a tree dotted with fireflies, blinking.” Payal Aggarwal tried to catch a yellow one in Ghaziabad, India.

Francoise Maurice listened to insects in Draguignan, France. Eva Limbach reflected on male-female communication in Germany. Ewa Kajtoch spotted them in Krakow, Poland. The female glow worms light up to attract a mate and remain lit during mating. Once mating ends, the light goes out, according to a haiku by Alan Peat in Biddulph, England. Anne-Marie McHarg watched a long string of writhing, twisting lights lift from the grass.

Crescent moon
the fireflies tell me
a story

the echo
of our arguments
fireflies

Fireflies
the lights of days gone by
blink on and off.

firefly sex--
light on during
light off after

On a gentle breeze
Snaking through a moonlight night
Fireflies rising

During the day, North American fireflies sport a dapper red head on a black cigarette stub-sized body. After sunset in North Carolina, the pulse of a tiny red-light made Charlie Smith pause by a cemetery fence. Gerald Friedman was blocked from entering a park in Espanola, New Mexico. John Hawkhead kept running.

maskless
gravedigger pauses
for a smoke

trail gate locked
no other fireflies
in a hundred miles

lockdown exercise
along the country track
a bat avoids me

J.L. Huffman decoded a message from the Blue Ridge Mountains.

Writing from Pasadena, California, Kath Abela Wilson admits she loves how the haiku in this column flow “like a stream of fireflies lighting the way, and attracting one another.”

Pippa Phillips lit a smoke and watched the sunrise off Cape Cod: the flickering of a firefly at dawn waiting for the empire to end.

fireflies at dawn--
first cigarette
of the day

The Ursa Major constellation always rises from the East above the horizon in the northern latitudes, but from her vantage in Brussels, Belgium, Marie Derley noted that springtime is the best time to find it sparkling on high with Ursa Minor--the Lesser Bear.

John Zheng was surprised by snowflakes when he opened his blinds in Itta Bena, Mississippi. Robin Rich twirled in Brighton, U.K.

early dawn
in the spring of sleet
flashes of white

child flashing by
in a revolving door
springs out

Benedetta Cardone turned off the blue light from a computer in Massa, Italy. Teiichi Suzuki was spooked by the sound of a metal spoon tapping on glass when he woke-up early in Osaka with a craving for something sweet on his toast. An introductory writing course inspired Marcie Wessels to release her inner fires in San Diego, California.

Ghostly hour--
at the bottom of the jar
crystallized honey

mason jar
a swarm of fireflies teeming
on the carpet

Mason jars can hold flies and preserve jam and honey, and all sorts of things, notes Isabella Kramer in Nienhagen, Germany: maybe I need him tomorrow sunbeam in a jar.

A. Sethuramiah retained the fragrance of Bangalore, India.

citronella
no respect for distances
from the mosquito

Frustrated, Marie Derley has to wait to slice tomatoes for the neighbor’s hamburgers in Wallonia, Belgium.

sowing my tomatoes
argh a good smell of grilling
from elsewhere

Tsanka Shishkova is a loving mother in Sofia, Bulgaria. Richa Sharma got help gardening in Ghaziabad, India. Orihara trekked alone, but the alpine wildflowers bunched together.

one more haiku
dedicated to my son
blooming irises

seedling growth
my daughter’s smile
adds to the compost

Ewa Kajtoch attended church in Krakow, Poland. Born-again Christians believe a spiritual birth allows one to walk in the newness of life. Slobodan Pupovac walked with a spring in his step in Zagreb, Croatia. Chilling news put the kibosh on Helen Buckingham’s plans to skip and dance in the warm spring sunshine.

gambolers
out to play
covid snap

the wind outside
humming the lockdown blues
another spring

Kanematsu was up before the lotus flowered. Paul Faust was eager to see what popped up in the park near his home in Ashiya, Hyogo Prefecture. J.L. Huffman prayed for the unity of three in North Carolina.

Smith’s wife found what she was looking for. Twelve-year-old Kayla Johnson hopes for good luck in Misawa, Aomori Prefecture.

Read haiku by the light of fireflies at http://www.asahi.com/ajw/special/haiku/. The next issue of the Asahi Haikuist Network appears May 21. Readers are invited to send haiku about a lunar eclipse, on a postcard to David McMurray at the International University of Kagoshima, Sakanoue 8-34-1, Kagoshima, 891-0197, Japan, or e-mail to