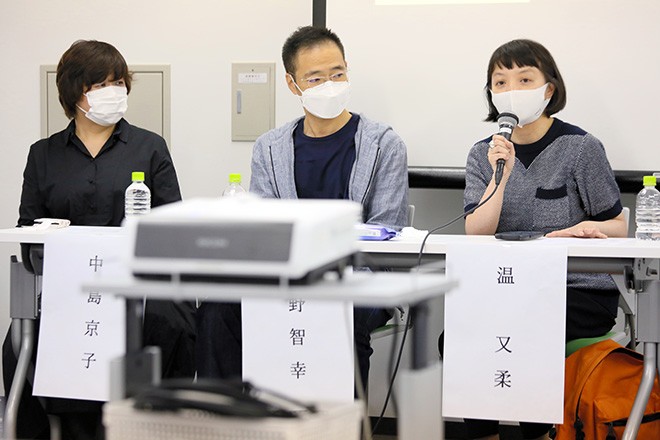 Novelists and lawyers opposed to a controversial bill that would revise Japan's immigration control law are calling on the government to scrap it, warning that the new measures would grant excessive power to immigration authorities.

“Immigration authorities have too much power,” novelist Kyoko Nakajima said at a May 6 news conference in Tokyo. “Something must be done to correct that.”

Nakajima recently completed a serial novel about a romantic relationship between a Japanese woman and a Sri Lankan man staying in Japan without a residence status. She had visited immigration facilities to conduct research for the novel.

Lawyers who held the news conference touched on the case of a Sri Lankan woman who died of apparent emaciation in an immigration detention facility in March. They said Diet deliberations on the bill should not proceed without first getting to the bottom of the matter.

“Japanese society has long been indifferent to non-Japanese people,” said Tomoyuki Hoshino, another novelist who attended the news conference. “It’s like domestic violence, or a cult, if we keep believing that we are right even when power turns into violence.”

The bill was submitted to the Diet in February with the aim of resolving the issue of foreign nationals, who were detained for overstaying their visas, spending long periods of time in detention centers before being deported.

While the existing law allows for provisional release, the bill would establish a new “monitoring measure,” which would allow detained foreign nationals to live outside detention facilities under certain conditions, and a “complementary protection” measure, which would be equivalent to the protections provided to refugees.

But experts have raised concerns that the revisions fail to meet international human rights standards.

The bill lacks provisions for the maximum detention period and judicial review on detention decisions. And while the current law protects asylum seekers from deportation, the bill would introduce an exception that enables deportation of those who have applied for refugee status three times or more on the same grounds.