Host towns lose out by canceling of pre-Olympic training camps 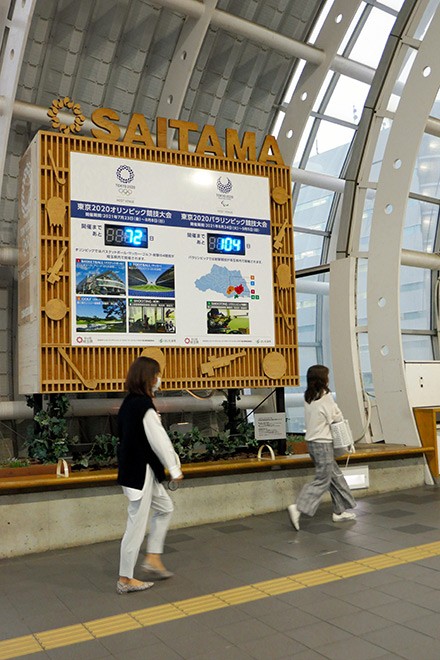 Like many communities in Japan, officials in Ageo and Ina were looking forward to helping make the upcoming Tokyo Olympics a success for the visiting athletes and their residents.

The Australian judo team was scheduled to practice at the prefectural Budokan martial arts gym in Ageo and members stay at a community center in the town of Ina, both in Saitama Prefecture.

Train stations in Ageo were planning to hoist a banner with a welcoming message for the athletes.

But on April 21, the Australian team notified the city that it won't hold its training camp in Ageo this summer because the novel coronavirus outbreak would prevent them from practicing with Japanese judoka.

Ultimately, the governments of Ageo and Ina on May 10 decided to give up on their dream.

“I was really looking forward to it… ,” an Ageo city official who is in charge of sports promotion said in disappointment.

The Ageo official is not alone in his feelings.

A cascade of cancellation calls and emails from around the world have saddened “host towns” for the Tokyo Olympics who have prepared for years to welcome athletes and foster international exchanges.

By May 13, 40 or so local governments had abandoned a plan to host a pre-Olympic and Paralympic training camp or an exchange program with foreign athletes, the central government said.

In Ageo, the disappointed official is now thinking about alternative ways to “send our community’s message to the athletes.”

The city has held an exchange event in the past in which local elementary school children mingled with judoka from Australia.

If the Australian judo team ever comes to Japan for an international competition, Ageo is willing to offer support and cooperation, the official said.

An email from Table Tennis Canada bounced into the inbox of the city government of Okaya, Nagano Prefecture, in late January.

The city was expecting to host the Canadian team this summer but the message dashed those hopes.

“We cannot get a clear vision of our future plans," the email said. "We have decided to have a pre-Olympic training camp in Canada and check into the Olympic village early.”

It was a heartbreaker for Kiwamu Sato, for personal reasons.

Sato, 29, who works at the Okaya revenue department, is the captain of the city government’s table tennis club.

The club is highly competitive and reached the final eight for three consecutive years until 2019 at the annual All Japan Corporate Table Tennis Championships.

For people like Sato, hosting a training camp meant an opportunity to test his game against Olympians.

“I was really looking forward to rallying with the world’s top athletes,” Sato said.

The connection between the city and Canada started when the 2005 Special Olympics were held in Nagano Prefecture and Okaya hosted Team Canada.

The head of Table Tennis Canada visited Okaya in late 2018 and gave a stamp of approval, saying that the training and accommodation facilities as well as practice partners would be excellent for preparing the team before the Tokyo Games.

But the optimism faded as the COVID-19 situation worsened.

Part of the gymnasium that the Canadian team was scheduled to use as a practice facility has become a vaccination site.

Ryo Okada, a 28-year-old ace player of the city government’s table tennis team, said, “I was looking forward to learning about Canada’s table tennis culture. But it can’t be helped, considering the infection risk.”

The cancellation, however, has not affected the supportive atmosphere, he said.

“We want to value the relationship as a host town and will cheer for the (Canadian team) throughout the city,” Okada said.

The Chiba prefectural government on May 12 announced that USA Track & Field canceled its pre-Olympic training camp scheduled in three cities--Narita, Sakura and Inzai--over fears of athlete safety amid the pandemic.

About 120 athletes were expected to stay in the cities, preparing for one of the prime-time Olympic events.

Chiba Governor Toshihito Kumagai said it was “very unfortunate,” but he said he thought the organization deciding to cancel the camp “is the best strategy.”

But receiving official notification is better than not receiving any communication, according to some local governments.

In Koshigaya, Saitama Prefecture, the city government is still waiting to hear from a Portuguese table tennis team about when and how many people are coming for the training camp.

“If this continues to go on, we will fail to prepare on time and may not be able to host a camp,” a city official said.

The local government has purchased five table tennis tables that cost about a million yen ($9,150). It will still have to rent a bus to transport the team and other necessary equipment, the official said.

Many host towns have faced a difficult decision over whether to allocate precious limited resources to the fight against surging COVID-19 cases.

Higashi-Matsuyama, a city in Saitama Prefecture, is one of these facing such a dilemma.

The city government on May 12 announced that it has given up on hosting the Cuban team that was supposed to hold a training camp there from late June to early July.

The Cuban athletes were expected to practice at an athletic facility on the campus of Daito Bunka University in the city. But the university told the city that the plan needs to be scrapped because it must focus on taking care of students in the pandemic.

Since there is no alternative facility in the city, the city officials decided to cancel the training camp after discussing the matter with the Cuban Embassy in Japan.

Okuizumo, a small town in Shimane Prefecture, has billed itself a hockey town since it became a venue for the sport at the 1982 National Sports Festival.

The town, with a population of 12,000 or so, has produced hockey players for Japan’s national squad.

Naturally, people in the town were excited for its plan to host a training camp for the competitive Indian hockey team before the 2020 Tokyo Games. They were looking forward to mingling with about 25 hockey players.

But the pandemic has dashed such a dream.

The Cabinet Secretariat has urged local governments that host a pre-Olympic training camp to implement strict anti-virus measures and separate the athletes from residents by chartering transportation, renting either an entire facility or the entire floor of a building for accommodations and keeping the public away from the team at train stations and other locations.

For small towns such as Okuizumo, which has only one public hospital, hosting a team in the pandemic became a high-risk, low-return venture, considering that the communication between the team and the residents will be limited to online only.

The town in March announced the cancellation of the training camp.

An official said, “The fact that local children will not be able to watch the practices up close and have some exchanges with the athletes was a big factor” in making the decision.

Such a conundrum has been felt nationwide.

An official of another local government, which also gave up its plan to host a training camp, said, “The more we implement anti-virus measures, the more the exchanges become in name only.”

Seiko Hashimoto, president of the Tokyo Olympics organizing committee, acknowledged at a May 12 news conference that host towns have spent years preparing for the Olympics and now are shouldering even more burdens to do so amid the pandemic.

“I know they are very disappointed,” she said.

CONNECTED NO MATTER WHAT

“The best part of having the Olympics in our own country has waned,” he said.

Despite the bad luck, however, many host towns are determined to maintain their relationships with the hosted countries and teams regardless of the fate of the Olympics.

In Nagasaki Prefecture, nine cities and towns have registered to be a host town welcoming teams from a total of six countries, of which five cities planned to host a pre-Olympic training camp.

But the prefectural government received two disappointing pieces of news in early May.

The Vietnamese government on May 5 notified prefectural officials that the country will no longer hold training camps in the prefecture--karate, judo and swimming in Nagasaki, track and field and fencing in Isahaya and badminton in Omura.

The Laotian swimming team was scheduled to have a training camp in Nagasaki, but the country’s swimming federation on May 7 told the prefectural government it had canceled the plans.

Both countries said they changed their minds because “COVID-19 infections are spreading globally,” a prefectural official said.

A prefectural official said, “It is sad but we have no choice. We will keep our efforts, together with related municipalities, to positively build deep international relationships."

The city government of Nagasaki already scrapped its initial plan to invite the athletes to local elementary schools about a year ago.

Still, school children have continued to study the histories of Vietnam and Laos, eat school lunches featuring their national cuisines and looked forward to experiencing international exchanges, if only remotely and limited.

“We have planned so many various exchanges that we are extremely disappointed,” a city official said.

An official of a local government elsewhere that also gave up its plan to host a training camp urges the central government to allocate resources for such efforts.

“We hope to exchange visits and interact with each other with the hosted country after the (COVID-19) situation is brought under control.

“Even if it’s one year after the Olympics, we will be happy,” the official said.