Meet Oki-chan the dolphin, still a hit in Okinawa after 50 years 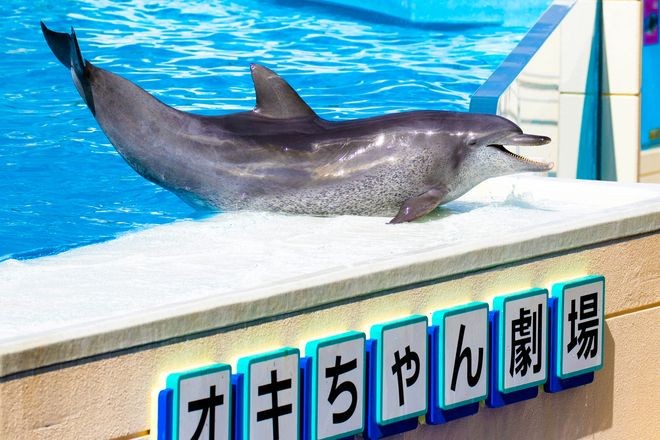 MOTOBU, Okinawa Prefecture--A dolphin here remains a rock of inspiration for locals during rough times nearly half a century after being relocated to Okinawa following the southern island's reversion to Japan from the United States.

Estimated to be 50 or so years old, she still always jumps high in her shows.

“Oki-chan is special because while Okinawa has gone through dramatic changes, she's still the same,” said Suguru Higa, 32, an aquarium official responsible for dolphin displays. “Her energetic performance gives us courage in the hard times brought about by the coronavirus outbreak.”

Since her arrival, Okinawa has seen both tourist booms and busts, but the dolphin has been a mainstay at the aquarium even through times when tourism almost completely dried up.

The 1975 Okinawa Ocean Expo, a huge event to celebrate the prefecture's May 15, 1972, return to Japanese sovereignty, named its mascot Oki-chan, which it also bestowed upon the Indo-Pacific bottlenose dolphin caught off Amami in nearby Kagoshima Prefecture due to her intelligence, good memory, and “potential to be a star.”

Visitors to Okinawa under U.S. military rule were primarily people who came there to console the souls of the war dead and tour wartime ruins. Okinawa is still home to numerous U.S. military bases.

The Ocean Expo was organized by the Japanese government and other parties to show Okinawa in a more positive light as part of a tourism promotion strategy.

A document from the time about the fair says the event’s objective was to “provide an opportunity to shed the conventional negative perception of Okinawa among people all over the world and to create a new image.”

One of its star attractions was the dolphin show dubbed “Oki-chan theater.”

Following the Expo, the former site of the Ocean Expo was renovated to host a park and aquarium. The dolphin show was retained, but most staff members returned to their own aquariums on the Japanese mainland and many dolphins died as they were kept in unstable conditions.

An expressway network was built and large hotels successively opened in Okinawa thanks to the enormous investment from the Expo but in the economic slump that followed, a slew of businesses went under and many people were thrown out of work.

To improve the situation, the aquarium hired a number of young people just graduating from local high schools.

Tasuku Nagasaki, now 75, who was invited from Chiba Prefecture as a visiting official at the time, said he well remembers the facility’s fresh and lively atmosphere and that Oki-chan was a big help in training other dolphins.

“She was clever and worked hard,” Nagasaki said. “Training her first, other dolphins then spontaneously followed instructions.”

After Okinawa's reversion to Japan, it dethroned Miyazaki Prefecture as the country's top honeymoon destination.

Because vehicles had to travel on the right side in Okinawa until 1978, unlike in other parts of Japan, tourists unaccustomed to driving on the right side of the road chose to hire taxis for their trips instead of renting a car.

The Oki-chan theater around that time was typically full of newlyweds snuggling close to each other and their taxi drivers seated a slight distance away.

In the first half of the 1980s, when many tourist groups from the same agricultural cooperatives and workplaces started filling the seats of dolphin shows, Oki-chan became pregnant with her first calf but she miscarried.

Though Oki-chan had calves on many occasions through the late 1990s, when more students started visiting Okinawa on their school trips, they all died soon after birth.

In 1999, Oki-chan showed signs of going into labor during one of her shows. The staff asked all spectators to leave the facility while anxious aquarium officials kept a careful watch over Oki-chan.

Following a successful delivery, Oki-chan was seen swimming majestically with her calf, which stayed glued close to its mother.

In September 2001, when a series of terrorist attacks hit the United States, the aquarium on the former expo site was gearing up to reopen as the Okinawa Churaumi Aquarium to mark the 30th anniversary of Okinawa’s return to Japan.

Out of fear that “U.S. bases there might be targeted by terror attacks,” school trips and other travel packages from Japan’s mainland were also canceled en masse.

A total of 250,000 people dropped their plans to go to Okinawa over a few months.

The aquarium resumed operations the next year and Oki-chan was allowed to perform at the remodeled facility, since the dolphin show had already proven to be a popular attraction among children on school trips.

Oki-chan's moves were such a hit with visitors who flocked to the aquarium from South Korea, Taiwan, China and elsewhere outside Japan that staff cut down on their play-by-play commentary during her show and let her actions take center stage.

But all that changed in 2020 when the COVID-19 pandemic struck.

The Oki-chan theater was closed for seven months in 2020, the first time the dolphin had suspended official performances for such an extended period. At one point, she performed five times a day with no one in the audience.

None of the other dolphins or staff members who worked with Oki-chan at the Ocean Expo dolphin show remain at the aquarium today.

But mention the name Oki-chan to a local here, and they're almost certain to know who you're talking about, even 50 years after her debut.