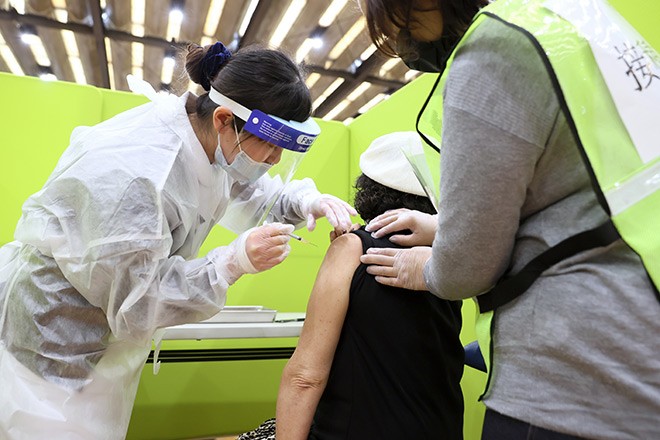 The government plans to adopt a system for emergency vaccine use, according to a draft of its basic policy. (Asahi Shimbun file photo)

Criticized over its pandemic response, the government is planning legislation to accelerate approval of emergency-use vaccines and to give authorities more power to secure hospital beds, according to a draft of its basic policy outline.

The Basic Policies for Economic and Fiscal Management and Reform, known as “honebuto no hoshin” (big-boned policy outline), will be the first for the Suga administration and will provide the foundation for policy management and the compilation of budget plans for the next fiscal year.

After negotiations with the ruling Liberal Democratic Party and ministries over the details, the government is expected to announce its basic policy proposal in the first half of June and approve it at a Cabinet meeting in the second half of the month.

However, the plan could face opposition.

Some health ministry officials and medical experts have voiced deep concerns about speeding up the vaccine approval process or giving more power to the central government and governors on health issues.

The plan was drafted as the government still faces criticism for its perceived slow response to increases in COVID-19 infections and its vaccine rollout, which lags behind those of Western countries.

“The government will discuss within this year how domestic clinical trials and vaccine approvals should be at times of emergency, and it will implement legislative measures,” the draft says.

Specifically, Japan is expected to consider establishing its version of the U.S. Emergency Use Authorization to allow emergency use of new vaccines if their efficacy is confirmed in test results.

The draft also includes a policy to strengthen support for domestic vaccine development.

During spikes in novel coronavirus infections in Japan, the health care systems of some local governments were overwhelmed, particularly from a lack of personnel and hospital beds for COVID-19 patients.

According to the draft, the central and local governments will be able to designate hospitals, including private medical facilities, for certain patients when the medical system is strained.

“Discussions will be held within this year to reinforce the authority and measures of the state and prefectural governments, and the government will implement legislative measures,” the draft says.