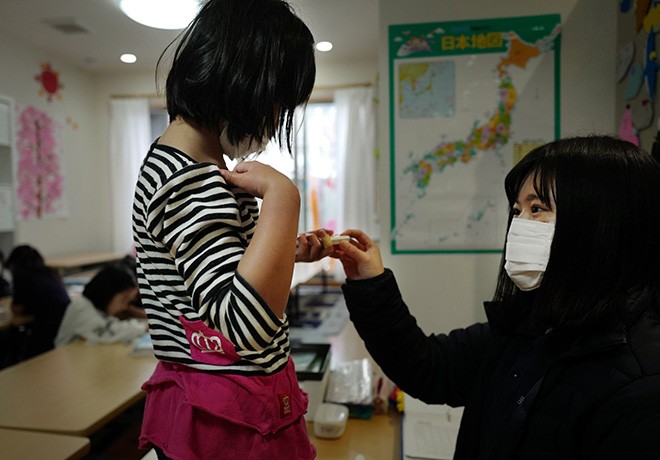 A staff member attends a child after her temperature was taken at a school in Osaka in April. (Asahi Shimbun file photo)

More transmissible COVID-19 variants have led to a rapid rise in infections among an age group previously seen as the least susceptible to the novel coronavirus, health experts said.

People under 20 years old now account for about 10 percent of all COVID-19 patients in Japan.

The health experts are making fresh calls for families to step up protection of their children and to monitor them for signs of severe symptoms that could develop weeks after they become infected.

Outbreaks have been reported at schools and child care facilities across the nation, affecting many children.

One example was a cluster infection that hit a preschool in Niigata Prefecture in February. Thirteen children and four workers were infected by a variant.

The virus eventually spread to family members, raising the total of infections to 42.

The case underscores the variants’ ability to spread more easily than the initial coronavirus that was prevalent last year, according to Akihiko Saito, professor of pediatrics at Niigata University who is tasked with compiling anti-coronavirus measures for the Japan Pediatric Society.

Health ministry statistics showed that patients under 20 numbered 78,952 as of June 2, accounting for about 10.7 percent of the 737,086 overall COVID-19 patients in Japan.

The figure for the under-20 age group has grown by about 2.2 times since Feb. 3, when the country was in the grip of variants that were fast replacing the original type of the coronavirus.

In contrast, the number of patients who are 20 or older has increased by about 1.9 times since Feb. 3.

Saito said the disparity in the growth of cases between the two age groups does not necessarily mean that children are more vulnerable to variants.

“As variants are more transmissible, they push up the number of overall infections, including children,” he said.

The common route of infection among children has been through family members.

But the sharp rise in infected children indicates that more younger people bear the brunt of household infections driven by variants, according to the experts.

One major concern in Japan has been the multiple reports of children developing multisystem inflammatory syndrome (MIS-C), in which patients’ heart or liver functions deteriorate, or they suffer from digestive symptoms, such as diarrhea and stomachaches.

The Japanese Society of Kawasaki Disease also said it has confirmed four severe cases of MIS-C among children who were infected with the novel coronavirus.

In one case, a teenage boy was hospitalized with a high fever and diarrhea about two months after a family member transmitted the virus to him.

The boy suffered from large lymph nodes in the neck, a rash, and red eyes and lips, which are also symptoms of Kawasaki Disease.

The causes of the disease, which usually affects children under 5 years old, are unknown.

The teenager was hospitalized for about four weeks and has since recovered. He has not complained of any aftereffects, according to the Japanese Society of Kawasaki Disease.

In the United States, more than 3.85 million children had been infected by the novel coronavirus by May 6.

The U.S. Centers for Disease Control and Prevention reported about 3,700 MIS-C cases, including 35 deaths, as of May 3.

Mamoru Ayusawa, associate professor of pediatrics at Nihon University and vice chairman of the Japanese Society of Kawasaki Disease, urged parents to closely monitor their children for symptoms, referring to a possible rise in MIS-C cases in Japan amid the continuing pandemic.

“(Parents) should pay attention especially to symptoms of children’s digestive organs, chest pain and complexion over a couple of months after they are infected with the coronavirus,” he said. “If children show such symptoms, they should see a doctor at a hospital with a large pediatrics department.”