EDITORIAL: G-7 summit a chance for Japan, S. Korea to mend their ties 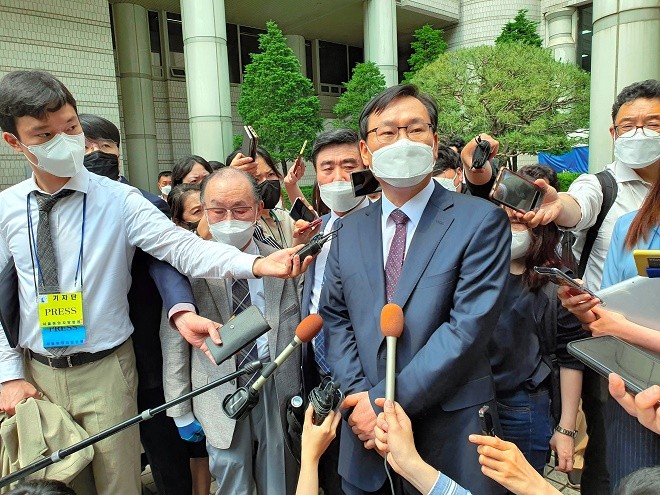 A lawyer representing plaintiffs in the lawsuit against Japanese companies over wartime labor speaks to reporters in the compound of the Seoul Central District Court after the verdict is handed down June 7. (Takuya Suzuki)

A South Korean court recently handed down a notable ruling concerning an issue related to Japan’s 1910-1945 colonial rule of the Korean Peninsula.

The Seoul Central District Court on June 7 dismissed claims by former Korean workers and their relatives in a damages suit against 16 Japanese companies over wartime labor.

The decision contradicted the South Korean Supreme Court’s ruling over a separate wartime labor compensation case delivered in fall 2018 that ordered a Japanese company to pay damages to workers from the Korean Peninsula called up to work during World War II.

The key bone of contention in these cases is whether the 1965 bilateral agreement between Japan and South Korea that restored diplomatic relations and which Tokyo maintains settled all compensation claims by South Korea stemming from World War II  precludes the right of South Korean citizens to still pursue legal redress.

The Supreme Court contended that since Japan’s colonial rule was illegal, the 1965 agreement did not settle individual claims against Japan for its wartime actions.

The latest court ruling, however, disagreed with the top court and maintained that the bilateral accord covered the issue of individual claims. While acknowledging that such individual claims have not lapsed, the district court decided that exercising that right is restricted by the treaty. The ruling is mostly in line with the position taken by the Japanese government and the companies involved.

In a similar reversal of a previous court ruling, the Seoul Central District Court on April 21 rejected a compensation claim against Japan by 20 former “comfort women” and their supporters. In January, the same court ordered the Japanese government to pay damages to 12 former comfort women forced to provide sex for Japanese soldiers during the war. The verdict was finalized the same month.

These mutually contradictory rulings are baffling, but they should be regarded as signs of the South Korean people’s complicated feelings toward Japan, which once deprived them of their culture due to colonial rule imposed on them against their will.

Both of the two new rulings involving pestering sores in bilateral ties focused on trends concerning international law and diplomatic efforts by the two countries following the formalization of diplomatic ties.

The rulings also seem to imply that the diplomatic arena, not the judiciary, should be utilized in efforts to provide redress for victims of sensitive historical matters.

As the strained bilateral ties amply testify, any judicial decision on these sensitive issues inevitably creates bitterness and discontent on both sides and does little to help promote reconciliation between the two neighbors.

The only way to provide relief to victims while fixing bilateral relations is through a diplomatic solution based on a solid political commitment by both countries.

Some members of the South Korean government and ruling party are critical of the rulings.

Since the administration of President Moon Jae-in has consistently said it respects judicial decisions, it can use the rulings as an opportunity to take bold diplomatic action.

If Seoul shows any sign of taking positive steps in this regard, the Japanese government, which is responsible for confronting Japan’s past injustices in the Korean Peninsula, should provide maximum support with the utmost humility.

The Seoul Central District Court was originally scheduled to hand down the ruling on June 10, but delivered it three days earlier for reasons that remain unknown. The leaders of both countries are due to attend the Group of Seven summit that starts in Britain on June 11.

The G-7 meeting offers a great chance to bring about a thaw in the chilly but very important diplomatic relations and should not be squandered.

The two leaders have a duty to take advantage of this opportunity and at least take a baby step toward breaking the diplomatic impasse, even with just a brief face-to-face meeting.