New secrets are being reported simultaneously around the world from a cache of documents called the Paradise Papers, 19 months after the shocking revelations contained in the Panama Papers.Over the past year, reporters from 67 nations who are part of the International Consortium of Investigative Journalists (ICIJ) have used the new documents to uncover the truth behind another tax haven in the Caribbean. 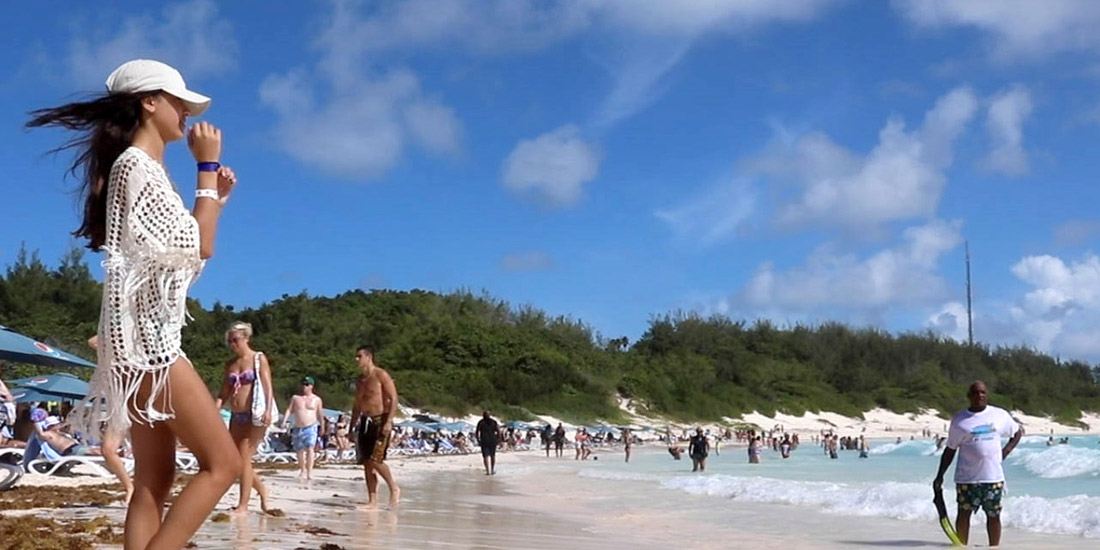 The British territory of Bermuda sits about a two-hour flight from New York and is surrounded by the blue waters of the Atlantic.Taxi drivers frequently greet newly arrived tourists with the phrase, “Welcome to paradise!”The waters within an area bordered by Bermuda, the southern tip of the Florida peninsula and Puerto Rico are known worldwide as “the Bermuda Triangle,” and legend has it that planes and ships mysteriously disappear within those waters. 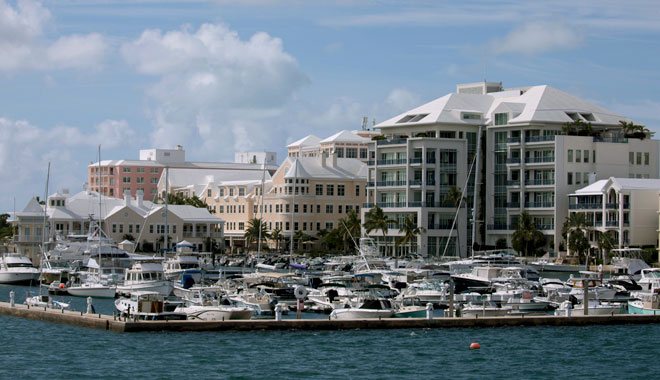 Many yachts float in the harbor of Hamilton, Bermuda’s main city. (Photo taken on Oct. 9)

It is early October, but the noon temperature in the main city of Hamilton is 26 degrees. A countless number of white yachts are anchored in the harbor near the pink sand beach. A soft breeze blows over the pastel buildings along the seafront.The U.S. dollar is commonly accepted, and Bermuda is a popular winter resort destination for Americans. There are more than 10 flights a day from such U.S. cities as New York and Atlanta, making Bermuda the equivalent of Guam to the ordinary Japanese traveler. 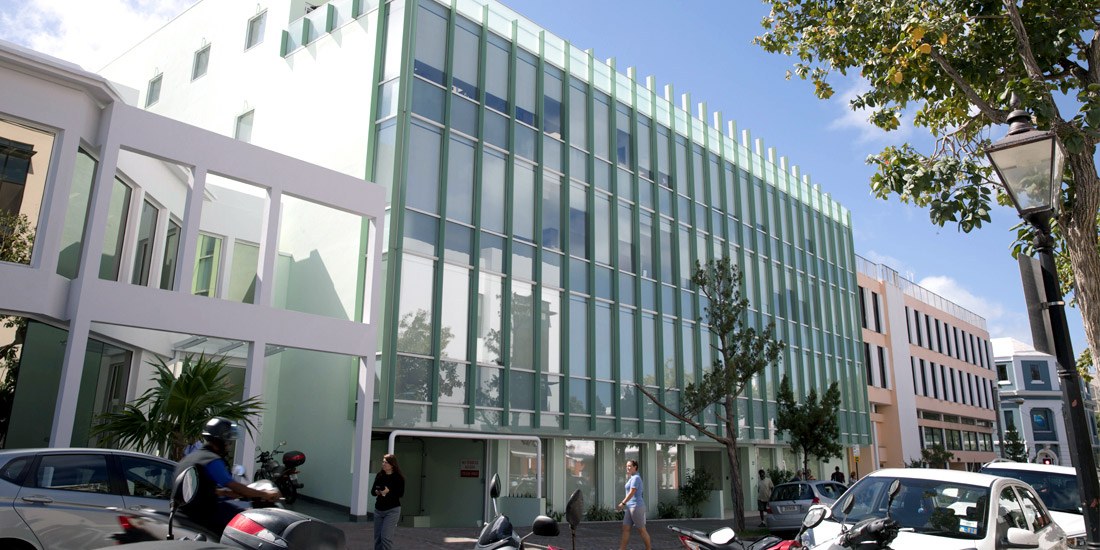 A team of reporters recently landed in Bermuda, but not for its balmy weather and relaxed atmosphere.Consisting of 138 islands, Bermuda has a land area of 53 square kilometers, about the same size as Tokyo’s Adachi Ward.In addition to being a tourist destination, Bermuda also has another facet: It is a major tax haven where no taxes are paid on income, corporate earnings or capital gains. For that reason, tens of thousands of multinational corporations are believed to have established bases in Bermuda to take advantage of the tax benefits by transferring earnings from their home nations.Bermuda’s financial district is located a short walk from the Hamilton seafront. Standing next to the Legal Affairs Ministry and Finance Ministry is a modern, four-story, glass-walled building, the target of the reporters during the October visit.The building houses the Appleby law firm from which the Paradise Papers were leaked. 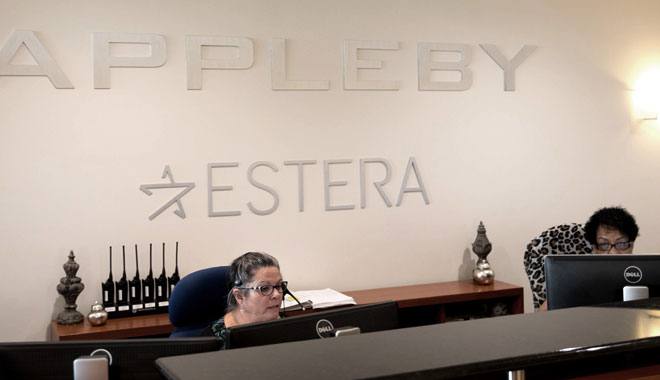 The reception desk of the Appleby law firm (Photo taken on Oct. 10 in Hamilton, Bermuda)

A total of 6.8 million leaked documents include such information as e-mails, bank accounts, and contracts related to about 25,000 clients of the law firm spread out over 180 nations around the world.As in the case of the Panama Papers, the large volume of data was obtained by Frederik Obermaier, a reporter with the German daily newspaper Sueddeutsche Zeitung. How and when he obtained the papers is highly confidential, and not even other reporters participating in the ICIJ have been told about such details.The papers unveil secrets that Appleby would never knowingly reveal and show the connections between various individuals, companies and money around the world.

This is a simple picture of what the documents reveal. 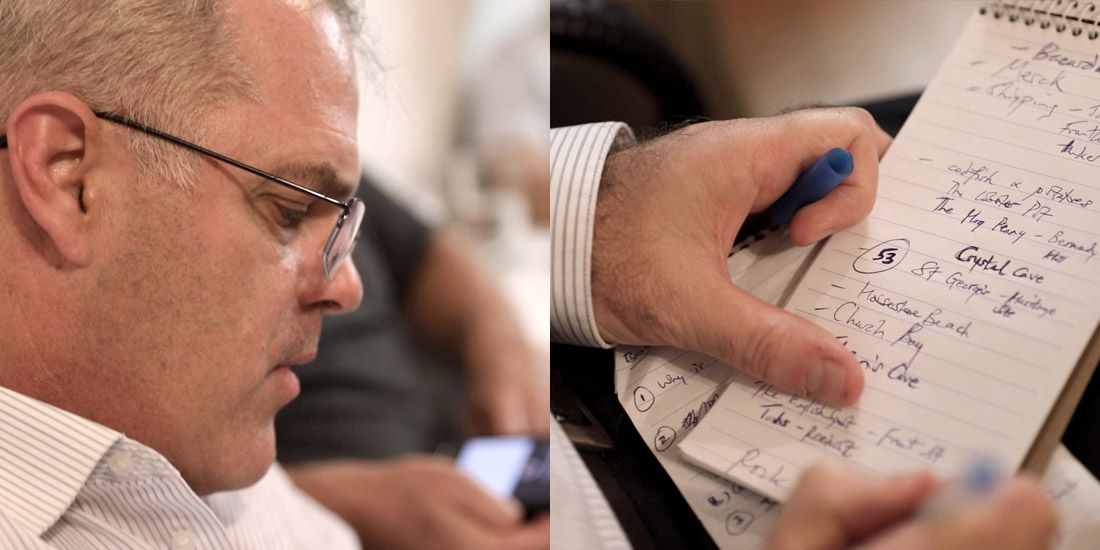 Before any stories can be written or broadcast on the leaked documents, questioning those involved is a necessity. The planned date for directly interviewing Appleby officials was Oct. 10. Since September, three letters were sent to Appleby asking for an interview with relevant officials.However, no specific response was ever received.A unique team effort was made by journalists from around the world in going ahead with the direct interviewing of Appleby officials. About 20 reporters from seven media organizations gathered in Hamilton. The organizations represented included The Asahi Shimbun and Japan Broadcasting Corp. (NHK), the U.S. investigative outlet VICE as well as the Australian Broadcasting Corp. (ABC).

Reporters from various media organizations gather in Bermuda for a strategy meeting. (Photo taken on Oct. 9)

The reporters hashed out a strategy in approaching Appleby.“What time are we going?”“Noon would be too late, but 10 a.m. would be too early.”“What should we do if they call the local police?”“I went to the office today. The reception desk on the first floor should be fine.”More than three hours of meetings were held from two nights before our visit to the Appleby office. Beyond having our interview requests rejected, our biggest concern was having any reporter or cameraman detained by local authorities.We told each other to go gently, but various issues had to be addressed because reporting rules vary by nation. We agreed not to cause trouble to local residents as well as not to overly agitate the target of our reporting. That meant thinking about how to approach Appleby officials as well as the timing for having camera crews enter the building. 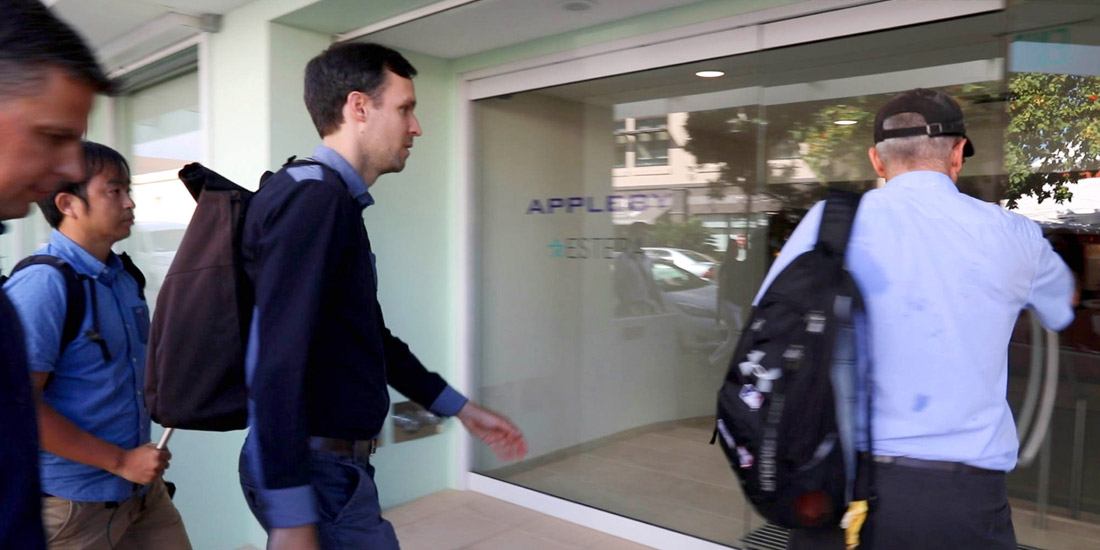 At 10:53 a.m. on Oct. 10, the way into the Appleby building was led by Will Fitzgibbon, 31, the ICIJ reporter who handled the mailing of the list of questions to the law firm, and David Adams, 56, senior editor with the U.S. TV station Univision Communications Inc., the most experienced member of the reporting team. Once they opened the building door, the reporters and cameramen from the other organizations followed.“Do you have someone who handles media affairs?” Adams asked. “We are journalists.”When he said the group was from the ICIJ, the receptionist asked, “International?”We were told to wait by the sofa near the entrance. However, rather than an official handling media affairs, the manager of the facility met the group. The man was dressed in the formal wear for the island: Bermuda shorts.Adams explained that we were there to ask about the leaked documents and that a list of questions had been sent beforehand.

David Adams, left, and others ask the manager of the law firm facility, right, to direct them to Appleby officials for an interview on the first floor of the law firm. (Photo taken on Oct. 10)

After about 30 minutes, the man returned from an upper floor and said, “Unfortunately, nobody’s able to talk with you right now.”We ended up with absolutely nothing in under a minute, making it abundantly clear how difficult it would be to find out about the realities of the tax haven through a formal approach.

Two weeks after the group visited the law firm’s office unannounced, Appleby posted a statement on its website that said:“Appleby has thoroughly and vigorously investigated the allegations and we are satisfied that there is no evidence of any wrongdoing, either on the part of ourselves or our clients. We refute any allegations which may suggest otherwise and we would be happy to cooperate fully with any legitimate and authorized investigation of the allegations by the appropriate and relevant authorities.“Appleby has recently received enquiries from the ICIJ and a number of media organizations who are partners of the ICIJ.“We are disappointed that the media may choose to use information which could have emanated from material obtained illegally and that this may result in exposing innocent parties to data protection breaches.”However, that statement was subsequently deleted from the law firm’s website.

The Panama Papers sent shock waves around the world because of some of the names of individuals included in the documents, such as a close friend of Russian President Vladimir Putin and the brother-in-law of Chinese President Xi Jinping.But the Paradise Papers contain equally startling revelations.Canadian Prime Minister Justin Trudeau made a campaign pledge to tighten regulations on tax evasion. However, suspicions arose from the Paradise Papers that an individual who procured funds for Trudeau had shifted a huge amount of money to a tax haven to avoid paying taxes.Among others whose names appear in the documents are Queen Elizabeth II and Yukio Hatoyama, a former prime minister of Japan.According to the ICIJ, the names of 127 politicians, monarchs and other dignitaries from 47 nations appear in the documents.

The ICIJ was particularly interested in one individual. That person is a key Cabinet member of the administration of U.S. President Donald Trump, who won election by attacking the U.S. establishment.We flew from Bermuda to the U.S. East Coast in an attempt to meet with this key figure in the Paradise Papers scandal.