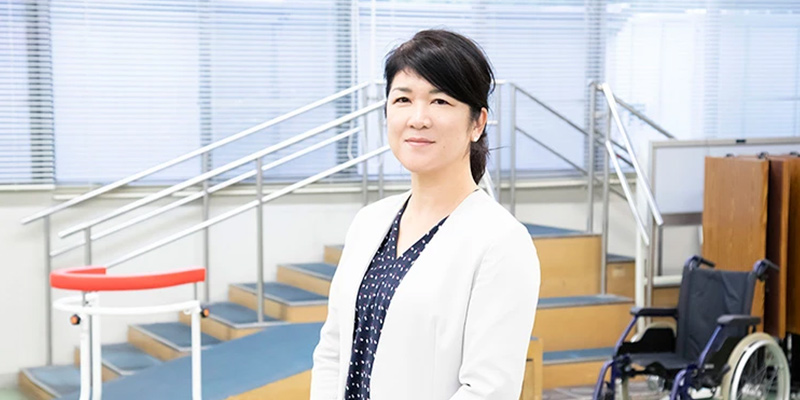 Supporting para-athletes through the expertise and knowledge of physical therapy

Due to the upcoming Tokyo 2020 Games, interest in the Paralympics has been gradually rising. In particular, one of the highlights of the Paralympics is wheelchair basketball, which has been an official sport of the summer Paralympics since it was first held in 1960. Athletes with disabilities such as spinal cord injuries or missing limbs compete in wheelchairs, and virtually the same rules as regular basketball are applied. A woman named Nami Shida decided to become a physical therapist after being fascinated by the speed and intensity of the game and has been supporting para-sports since its early days. We interviewed Nami Shida, who currently teaches physical therapy as an associate professor at a university and passionately supports the promotion of sports for persons with disabilities.

It was during high school that Shida decided that she wanted to become a physical therapist. She had enrolled under a basketball recommendation into a school with a strong team. She was aiming to join a corporate team back then, but she often suffered knee injuries. She recalls watching the game at a time when she had concerns about her future as a basketball player.

“I became captivated by a wheelchair basketball game that I just happened to see. I was utterly intrigued that the players were able to play such a powerful game, regardless of their disabilities. I got really excited, thinking that this was the most fascinating sport I’ve ever watched. I was also truly inspired by a program that I watched, about a young boy who had lost his leg, playing sports. While watching the physical therapist who supported the boy, I realized that I want to do that job too. From then on, I pursued the path to becoming a physical therapist, and not an athlete.”

A physical therapist’s job is to support the recovery and maintenance of motor functions through exercise and physical therapies of people who may potentially suffer physical disabilities due to illnesses or accidents. In the event that a person suddenly becomes disabled, such as due to an accident, it often requires an extended period to recover mentally, and the role of a physical therapist includes the support of the mind. A person requires national certification to become a physical therapist, and it is necessary to study at a training school for a minimum of three years in order to qualify for the certification exam. After becoming certified, physical therapists generally work in places such as hospitals, rehabilitation facilities, or long-term care insurance-related facilities. In recent years, there is an increasing number of those who work as a member of an athlete’s support team.

During her stint at a rehabilitation facility, Shida enthusiastically supported the facility’s wheelchair basketball team as a volunteer. She would head to the gymnasium three days a week, despite being exhausted after work. Once there, she would condition the players’ bodies or pay careful attention to any potential risks. She would also offer guidance as necessary, tackling issues such as preventing or caring for pressure ulcers that develop when the back is in close contact with the backrest of a wheelchair and adjusting the body temperature of athletes who cannot secrete sweat due to sweating disorders. Only a select few comprised the staff. Shida did everything from collecting the balls during practice to accompanying them on away games.

“I’ve often received inspiration through my experiences in diverse situations, which have helped me grow. One of the most memorable moments was when the team that I was supporting in the 2005 “U23 World Wheelchair Basketball Championship” placed second for the very first time. At that time, I was also involved in cultivating the next generation of wheelchair basketball players.

Meanwhile, our team was working hard towards winning the Japan Wheelchair Basketball Championships. Unfortunately, we were knocked out mid-tournament every year. However, even though we all felt disappointed that we didn’t make it again that year, the whole raised their faces as if to say, ‘let’s try our best next year’, and that was the most moving experience, the most memorable time in my life.”

Eventually, various organizations for adaptive sports also began to ask for Shida’s assistance. During this time, one of the most substantial challenges she faced was the question: “why is it so difficult for adaptive sports to become widespread in Japan?” She thus decided to enroll in evening classes at a graduate school to study sports management. After graduating, Shida left her job at the rehabilitation facility to further broaden her field of activities, which then led to her current position.

“I wanted to make people with disabilities feel the same affinity for exercise as non-disabled people do. That’s why I took a step forward, to aim to create a society where people can enjoy exercise more freely by engaging in them differently than before.”

Sports as preventive care and the future of physical therapists

Thirteen years have passed since Shida became a university faculty member. She says that she feels that society’s perspective of adaptive sports has steadily changed since it was decided that Tokyo would host the 2020 Games.

“I used to be constantly told, ‘how long do you intend to keep on with this?’. However, I think that this lack of comprehension has changed quite a lot. I believe that people have gained a deeper understanding of the high-level sports that the para-athletes compete in, and even some para-sports have become popular enough to gather an audience. However, my honest opinion is that our society hasn’t reached the point where everyone, including people with severe disabilities and the elderly, can casually enjoy exercising.

There are currently over 100,000* physical therapists (in Japan), and there are times when I stop to ponder about what it is that we can do in this situation. In recent years, there has been some focus on work in the nursing care sector in terms of “prevention” and the involvement of sports relating to athlete support. Now that there is a need to extend healthy life expectancy as we approach the age of a 100-year life expectancy, I’m hoping that we can offer more ideas on how to easily incorporate exercise into our daily lives.

For example, for people with hemiparesis or the elderly, the movements of golfing are suitable for them, so perhaps we could recommend that they exercise at a driving range or try out target bird golf (a variation of mini golf). In addition to day services at nursing homes, a public community, where people can comfortably gather, could be created. I also think that the elderly need additional stimuli in their lives, such as feeling the drama and excitement by watching sports.”

*As of the end of March 2019, the number of registered members of the Japanese Physical Therapy Association is approximately 120,000.

“Even though we wish for many things to be more commonplace, more familiar, we can’t help being exclusive, with the feeling that we don’t want to get close to something that we are unfamiliar with. The same goes for nursing care and supporting the disabled. People tend to keep a distance, unsure of whether it’s okay to offer help or not. However, if there were a person around you, not necessarily yourself, who is caring for someone or is receiving care, or has a disability, then you would have the opportunity to learn the right way to approach the situation and understand what kind of support is required. I think that first and foremost, it’s important to gain familiarity.

In the case of adaptive sports, things haven’t reached the stage where the audience can feel free to jeer at the players. It’s more like everyone claps their hands and gives a silent nod as if to say, “well done!”. I think that if people started to feel more comfortable to hoot and jeer, the sense of unease would be wiped out entirely, and it would become a more ordinary sight.

The whole appeal with sports is to enjoy what “isn’t allowed” by the rules. In volleyball, you’re not allowed to drop the ball, and in rugby, you’re not allowed to pass the ball forward. The rules and restrictions add to the fun of the game. In the case of blind soccer, you’re not allowed to see, so the players wear goggles. The watermelon splitting game is the same, and what makes it fun is the blindfolding. It's the same with adaptive sports. The rules in adaptive sports have been tailored accordingly, so one of the real pleasures of watching the games is the highly strategic nature of the sports. I pray for the day to come that these sports soon become accepted by the general public as a new source of entertainment, something that is familiar and ordinary, with neither an overwhelming sense of negative nor positive.”