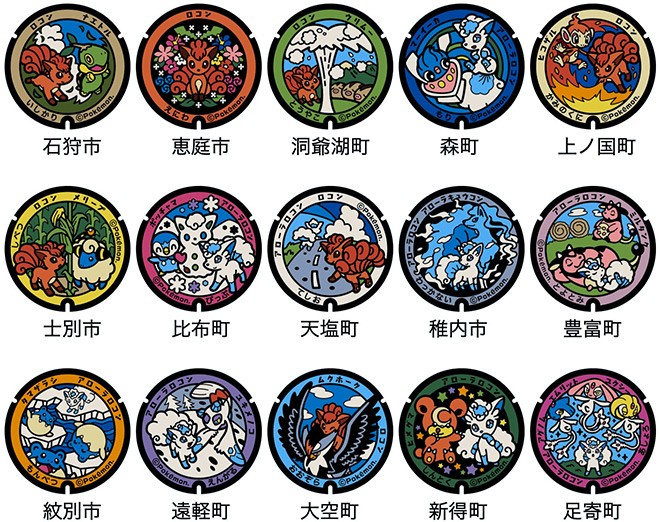 “PokeLid” manhole covers being installed in 15 cities and towns across Hokkaido (Provided by The Pokemon Co.)

SAPPORO--Cities and towns across Hokkaido are going to extraordinary lengths to equip their streets with manhole covers featuring characters from the “Pokemon” video game.

Fans are flocking to municipalities where they have been installed.

A Pokemon-themed cover in Pippu in northern Hokkaido has caused a stir on social media. It is called “Japan’s most overly protected manhole cover” because of steps taken by town officials to ensure the lid is not buried under snow in winter.

The Pokemon Co., based in Tokyo’s Minato Ward, has been presenting municipalities with manhole covers since 2018 to assist them in their efforts to promote their communities. As of December, 70 or so such covers had been installed in six prefectures across the country.

In Hokkaido, prefectural authorities called on local governments to join the campaign, to which 15 cities and towns signed up. It was decided to install one in each municipality.

The manhole covers, called “PokeLids,” each have a diameter of 60 centimeters. Each design is different, but features a fox-like character either as Alolan Vulpix or Vulpix.

The manhole cover installed in Eniwa shows Vulpix surrounded by flowers. The one in Toyotomi features a cow-like Miltank and Alolan Vulpix relaxing in a pasture.

When installation began in late November, fans posted photos of the PokeLids and comments like “cute” on Twitter and other social networking sites. Because the northernmost prefecture is so vast, some fans said the manhole covers are too far apart from each other.

“It’s colorful and cute. But I don’t think I can visit all the spots,” said Kana Ito, 26, an Eniwa resident who visited the Hana Road Eniwa roadside rest area in the city to see the PokeLid.

In Pippu, officials set up a tent over the PokeLid near JR Pippu Station, placing a scoop and a broom around it for visitors to clear snow.

They even set up a signboard that reads: “Use the scoop and the broom gently to find and ‘get’ me!”

“Many people are visiting the town to see the lid. We want to make use of it to promote the town further,” said an official working for the community development promotion office of the general affairs and planning section at the town office.

According to The Pokemon Co., the PokeLids will serve as “PokeStops” for smartphone game app “Pokemon Go” to collect in-game items.

The PokeLids have been or will be installed in Wakkanai, Monbetsu, Ishikari, Eniwa and Shibetsu cities, as well as Toyotomi, Engaru, Ozora, Shintoku, Ashoro, Toyako, Mori, Kaminokuni, Pippu and Teshio towns.

For details about the locations, visit the official website at (https://local.pokemon.jp/en/manhole/).