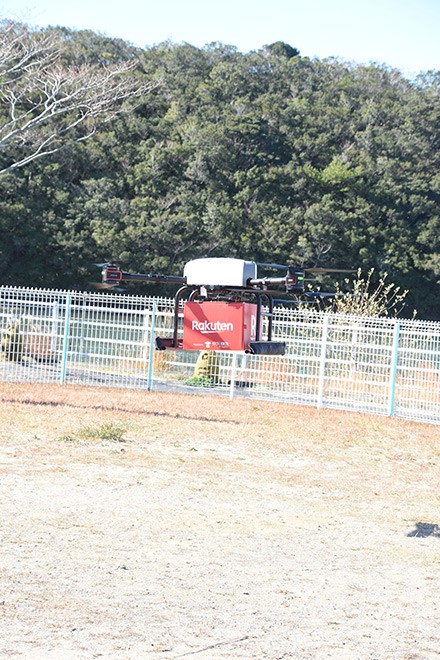 A drone delivers products in this test flight demonstration held in Mie Prefecture on Jan. 10. (The Asahi Shimbun)

The government is drawing up legislation to provide financial incentives and other assistance to domestic companies that develop drones with sophisticated technologies to thwart cyberattacks.

While the move is intended to give Japan an edge in the fierce international competition to develop next-generation drone and telecommunications technology, the planned legislation is also an attempt to counter the huge market presence of companies such as China's Huawei Technologies Co., which is leading the race for fifth-generation (5G) telecom technology.

The United States has raised major national security concerns about allowing Huawei and other Chinese concerns to dominate the 5G field and taken action to bar them from developing 5G networks there.

5G technology is expected to allow for wider use of drones to not only deliver products to outlying areas but also provide security and building inspection services. But the telecom network would also be tied into the internet, raising the prospect that advanced drones could be hijacked by hackers wanting to take over the operation of the drone or steal data collected by the device.

To prevent hacking, the legislation would provide incentives to companies that develop drones with advanced security measures.

Given that the drone market in Japan is now dominated by Chinese enterprises, government officials are hoping the bill will encourage Japanese companies to begin developing not only drones, but also products related to 5G telecom technology.

The bill will be submitted to the ordinary Diet session to be convened on Jan. 20 with plans to enact it into law this summer.

The use of drones is currently limited under the Civil Aeronautics Law. For example, the devices can only be flown while they are visible to the operator. They are prohibited from flying over urban areas or important facilities, such as nuclear power plants and airports, due to safety concerns.

However, the government is planning to relax those restrictions by fiscal 2022 to allow for greater use of drones to deliver products to underpopulated rural areas and for other services.

The growing market for drones is expected to spur the development of more advanced devices as well as operating systems that allow for preprogramed flights via the internet using 5G telecom technology.

To deal with security concerns that are bound to arise, the proposed legislation would provide financial support to companies that develop and acquire drones and piloting systems that employ advanced security measures to prevent hacking.

One proposal under consideration is to relax the conditions for investing in such companies on the part of government-affiliated venture capital. Japan Finance Corp., a government-owned corporation, would also find it easier to provide low-interest loans to such companies that the government vouches for.

The legislation would also include provisions for a framework to certify the safety of equipment used at base stations for the 5G network. With Huawei and ZTE Corp., another Chinese company, together holding about a 40-percent share of the global telecom market, the move is intended to keep them and others out of the Japanese market.

The four major Japanese telecom companies, among them NTT Docomo Inc., are planning to begin offering 5G service from this spring.

The proposed bill would also provide financial support to companies that develop technology for the 5G network. Such companies will be obliged to prove their technology is effective against cyberattacks as well as having established setups to ensure their services can be provided in a stable manner. The companies will also have to employ technology that meets international standards.

But Japanese companies face an uphill battle in this regard. Companies such as NEC Corp. and Fujitsu Ltd. currently only have about a 1-percent share each of the international and domestic market.