Nikka to wind down sales of aged Taketsuru whisky labels 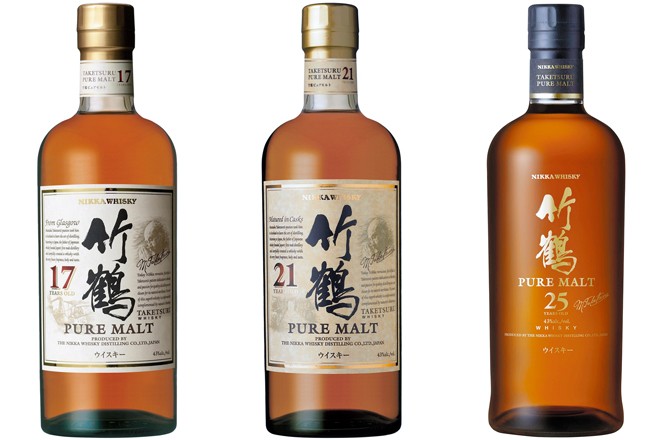 Connoisseurs of Nikka Whisky Distilling Co.'s signature brand Taketsuru, blended malt whiskys that are aged for differing periods to maturity, may soon be crying in their drinks.

The company will no longer sell Taketsuru Pure Malt with labels of “17 Years Old,” “21 Years Old” and “25 Years Old” after the end of March.

Asahi Group Holdings Ltd., the parent company of the Japanese liquor producer, blamed the decision on the increasing demand for domestically produced whisky, which has led to a shortage of raw whisky.

The company said it will continue to sell the “non-aged” bottles that have no indication of the age of the whisky, after redesigning the bottles.

Previously, Nikka Whisky Distilling ended the sales of other signature single malt brands Yoichi and Miyagikyo with labels indicating the age in 2015.

With the end of Taketsuru, domestically produced Nikka whisky that is aged for a certain number of years will completely disappear from the market.

To increase the production of raw whisky, the company plans to invest about 6.5 billion yen ($59 million) on its Yoichi Distillery in Yoichi, Hokkaido, and Miyagikyo distillery in Sendai by 2021.

The company will build more storage space where raw whisky will be aged and increase the storage capacity by 20 percent.

The domestic shipment of domestically produced whisky doubled in the decade starting from 2008, with the soaring popularity of highball drinks.

Suntory Holdings Ltd. and Kirin Holdings Co. have also ended sales of some domestically produced whiskys. At the same time, they have increased the sales of imported bourbon whiskey and scotch whisky.