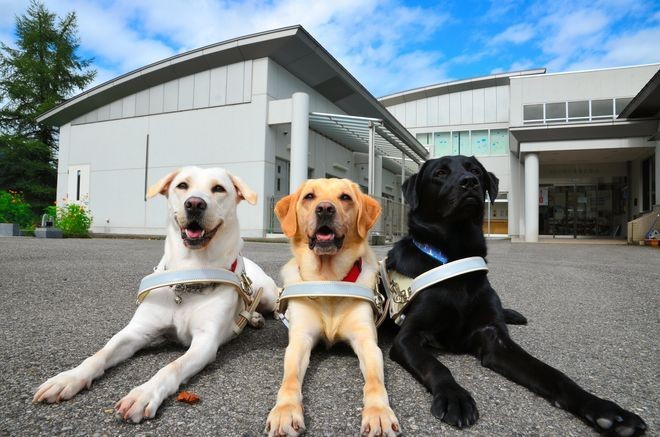 Dwindling funds and fewer volunteers have led to a sharp decline in the number of guide dogs at a time when visual impairments are expected to rise in Japan’s graying society.

Human caregivers and advanced technology, such as apps, are increasingly being used to help blind individuals in their daily lives. But some insist they cannot replace the companionship and benefits of using guide dogs.

A 2009 survey by the Japan Ophthalmologists Association showed there were 1.64 million visually impaired people across the country. The figure is projected to reach 2 million by 2030 mainly because of the advancing age of society.

Eye Mate Inc., an organization based in Tokyo's Nerima Ward that raises guide dogs, said 219 canines were working for their owners in fiscal 2018 after leaving the organization, compared with 314 in fiscal 2009.

The organization was founded by Kenichi Shioya, who developed more than 1,100 guide dogs throughout his life, including Champy, Japan’s first domestically produced guide German shepherd.

Guide dog candidates spend an entire year at ordinary households two months after their birth to gain emotional stability and adapt to life with humans. Then they undergo training.

Many child-rearing families had been willing to accept the puppies to “help promote psychological development of children,” according to Eye Mate.

But fewer households are volunteering because the number of newborns has declined and more couples are working outside their homes.

In addition, it is often difficult to keep large dogs in apartments in the capital.

“I once went here and there for a month to find volunteers,” said Takao Shioya, head of Eye Mate, referring to the difficult situation.

Groups that nurture guide dogs generally operate on donations. They say they are now scrambling to raise money because crowdfunding and other sites provide potential donors with so many other causes to support.

Although administrative authorities offer a subsidy of 1 million yen ($9,100) to 2 million yen per dog, it is not enough to cover the 5 million yen needed to develop a guide dog.

With more support options available to individuals with impaired vision, the guide dog shortage might not appear to be a problem.

Hiroki Ijichi, a 61-year-old resident of Tokyo who is visually impaired, has an assistant accompany him outdoors under a support system introduced by the government in 2011.

Reservations must be made in advance, and the service is available only during certain hours. But Ijichi said he can feel “a sense of security because it provides care by humans.”

In addition, smartphone apps that convert visual information into audio data have drastically improved since their release.

“Machines cannot offer a silver bullet but they have made things much easier than in the past,” Ijichi said.

People with guide dogs are sometimes treated unfairly.
Although a law to eliminate discrimination against disabled people took effect in 2016, there is basically no punishment imposed on offenders.

An Eye Mate study revealed that 52.9 percent of visually impaired people were refused entry to shops and stores in 2018 and 2019 because they were with their guide dogs.

Still, Akihiro Arakawa, 53, president of Rabbit, a company that helps disabled people live on their own, said guide dogs cannot be replaced by caregivers or technology.

Arakawa, who is visually impaired, used to take long business trips with his employees. But he started living and traveling throughout the country with a Labrador Retriever after he turned 40.

“I owe it all to my guide dog that I can freely move about without constraint,” Arakawa said. “Care must be provided, but life with a canine gives me more benefits than disadvantages. I do not want the options to be limited.”