New USJ Mario attraction will take flight ahead of Olympics 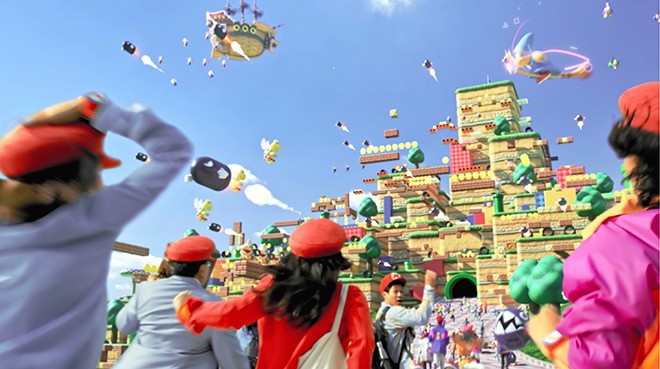 OSAKA--Visitors to Universal Studios Japan (USJ) can become Nintendo Co.'s iconic character Mario in an attraction that will open ahead of the 2020 Tokyo Olympic and Paralympic Games.

USJ on Jan. 14 promoted the upcoming opening of Super Nintendo World, where Mario will be the prime attraction. Park visitors can enter a virtual world where they run through the venue and gather coins and various items as Mario does in the game.

Question blocks like in the video game will be placed throughout Super Nintendo World on the grounds and in basement floors. Players can collect coins when punching the blocks.

Participants will wear wristbands that link to smartphones and compete with other guests including friends and family to collect the most coins. Events will also be held for groups working together as teams to defeat enemy characters.

“Visitors can have a realistic experience of becoming Mario and enjoy the attraction through using their entire bodies," said Ayumu Yamamoto, the operating company's marketing manager.  "Their instincts to play can be fully unleashed.”

USJ invested more than 60 billion yen ($546 million) on the attraction, the largest amount ever since the park's opening in 2001. It plans to create other offerings in Super Nintendo World including the race game “Mario Kart” and popular character Yoshi.

In February, USJ plans to hold a large-scale promotional event in New York that will seek to attract visitors to the park from around the world.
U.S.-based Universal Parks & Resorts, which cooperates with Nintendo, also plans to create Nintendo areas in two theme parks in the United States and a theme park in Singapore.