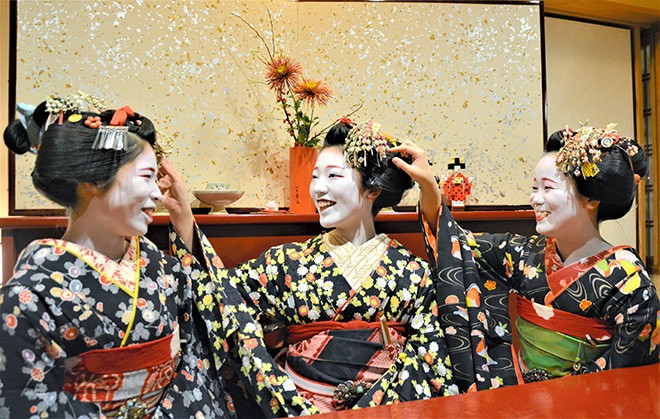 NARA--Much is riding on the training of three "maiko" apprentice geisha here. Kikuno, their teacher, is the last geisha in Nara's Ganrinin entertainment area.

Without new blood, the ancient art form will disappear from the “hanamachi” (flower street) entertainment area that once bustled with 200 or so geisha.

Currently, the veteran geisha has three young maiko under her wing.

In December, two of them took the stage at a geisha party at Kikusuiro, a traditional Japanese-style restaurant near Nara Park.

Clad in stunning kimono, their hair adorned with floral pins, Kikue, 20, and Kikunami, 19, danced to samisen songs in front of a gold-leaf-covered folding screen, the broad sashes of their kimono swaying in time to the music.

The monthly event is held by a group formed to revitalize Ganrinin, whose 100 members include company presidents and heads of branch offices in the prefecture.

“We can’t let the culture of geisha parties in Nara die out,” said one company president attending the shindig. “It's really a pleasure to see these maiko grow.”

Kikue said she's going all out to master the ropes of being a geisha.

“From morning, I begin taking lessons and learn new dances,” she said.

Ganrinin, which opened in the Meiji Era (1868-1912), used to have more than 10 “okiya” lodging houses for geisha, and roughly 200 geisha and maiko at its peak in the early Showa Era (1926-1989). Their number began shrinking after Japan’s rapid postwar economic growth ended in the early 1970s.

Kikuno still recalls how strikingly beautiful she found Ganrinin's geisha upon seeing them out strolling for the first time when she arrived in the area around the age of 17.

Even then, senior geisha were in serious decline, down to 30 or so in the Naramachi district.

To keep the art form alive, Kikuno in 2012 started a project to revitalize Ganrinin.

“Naramachi should be a place where it's a common sight to see maiko out walking,” she said. “I want people to feel connected to maiko.”

In addition to training maiko, Kikuno has brought traditional Yamato-odori dancing back to the stage and hosts the annual Naramachi Hanaakari (flower light) stage show in Nara Prefecture.

Geisha from hanamachi entertainment areas in Gifu and Fuki prefectures and elsewhere in Japan perform in the show in Nara Prefecture.

Kikue moved in with Kikuno to learn the art of being a geisha in spring 2018, after she graduated from high school in Saijo, Ehime Prefecture.

Kikue's original plan was to work at a hotel or theme park, but in June 2017, while still in her third year, she saw an online documentary on maiko, which put a quick end to that.

“I saw women who were dedicating their lives to improving their performances in a uniquely Japanese world,” she recalled. “And they looked really cool.”

Kikue's parents were split over their only daughter's decision to study the art form.

Her father, a company employee, “was concerned about me having to entertain guests at geisha parties by pouring sake for them,” Kikue said.

But Kikue said her mother, who is a homemaker,  encouraged her to follow her dream. “She said, just do whatever you want to do.”

Kikue knew hanamachi were connected with Kyoto, so she thought first of going to the city to learn the ways of the geisha. But most girls in Kyoto's hanamachi areas start training right after graduating from junior high school and she was set on completing high school.

During her third year in high school, she was interviewed by Kikuno about the prospect of becoming one of her apprentices in Nara.

“She was full of energy,” Kikue recalled. “She's very motivated, not only about improving performances but also about reviving hanamachi.”

Kikuno's other maiko is Kikumame, who hails from Togane, Chiba Prefecture.

The 17-year-old said she has been crazy about kimono as long as she can remember, and made a point of donning a special kimono on New Year's Day every year since she was a small child.

In November 2018, she arrived in Nara to begin training with the Ganrinin geisha.

Her path to studying under Kikuno echoes Kikue's.

She, too, developed her interest in hanamachi while in junior high school. Searching for hanamachi online, she learned that Kikuno's Tsuruya teahouse was recruiting maiko.

After graduating from junior high school, Kikue made a beeline for Ganrinin.

Training under Ganrinin's only geisha has instilled a sense of pride for the hanamachi area in Kikumame.

“Nara's maiko should become as famous as Kyoto's,” she insisted.

Kikuno's latest apprentice is Kikunami, who joined Kikue and Kikumame in the spring of last year.

The new recruit has a talent few maiko possess: She speaks English.

Kikunami, who was raised in Osaka, was a keen student of the subject at high school.

Kikunami, who said part of her reason for studying English was so she could talk about hanamachi in the language, thought for a while she might attend university and study abroad. But she couldn’t imagine what kind of job she could land in the future.

Now, she said her goal as a maiko is to use her linguistic ability to inform foreign visitors to Ganrinin about Japanese culture.

“It's great to be diving into the world of hanamachi that I love,” Kikunami said.

The three maiko take lessons with Kikuno on a range of activities, including classical Japanese dance and samisen. They also receive instruction on tea ceremony, flower arrangement and calligraphy.

Kikuno said she would love Naramachi to remain a place where young people are inspired to become maiko from seeing them in the streets as she herself once did.

“Some people lament that ochaya and okiya are disappearing from Naramachi,”  Kikuno said. “But I like it that there are more modern shops here than before and there are young people, foreigners and maiko walking on the streets.”