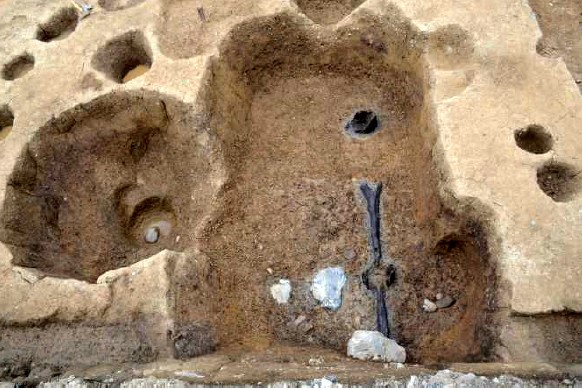 Remains of a sake brewery dating from the Muromachi Period in Kyoto (Provided by Kokusai Bunkazai Co.)

KYOTO--No fancy machines here, just a lot of hard work. But this brewery still produced sake, and it's believed to be the oldest ever found in Japan.

Excavation firm Kokusai Bunkazai Co. unearthed the brewery believed to be from the 15th century at the Saga archaeological site, formerly on the grounds of Tenryuji temple, in Kyoto's Ukyo Ward.

Among the finds are a facility for squeezing the unrefined sake out and about 180 holes for holding storage jars.

The previously oldest-known brewery found in Itami, Hyogo Prefecture, is estimated to have been built in the Edo Period (1603-1867).

"The discovery (in Kyoto) is likely the oldest sake squeezing facility," said Masaharu Obase, director of an Itami city-run museum. “It is smaller but has the same structure as the one dating to the Edo Period, indicating that a similar sake squeezing method was used in the medieval period.”

It was already known that sake was produced at Tenryuji temple during the Muromachi Period (1336-1573), allowing it to earn major profits and lend the money out at high interest rates. However, it was the first time that an archaeological finding has corroborated the fact, according to Kokusai Bunkazai.

The Tokyo-based company surveyed a 700-square-meter area near the current grounds of Tenryuji ahead of apartment construction between May and August 2018.

During the research, part of a sake squeezing facility believed to be from the 15th century was unearthed. Researchers said unrefined sake in cloth bags was placed in a tank and squeezed out, using a wooden bar with stones as leverage.

A pillar 1 meter long and 45 centimeters across, as well as two crosspieces to support it, each 15 cm per side and 1.8 meters long, were discovered along with about 20 stones that would have been placed on the crosspieces.

A hollow 1.8 meters across and 1 meter deep for a pot to receive drops of pressed sake was also found.

A smaller pillar from around the 14th century, 30 cm across and 40 cm long, was spotted two meters east of the hollow. Researchers said it is likely that the brewery was rebuilt.

The 180 holes for jars that stored sake are 60 cm across and 20 cm deep. Fragments of 14th-century Bizen ware jars, apparently with a diameter of 60 cm and a height of 1 meter, were unearthed as well.