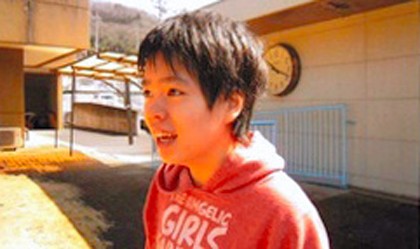 Miho when she was 19 (Provided by Miho’s family)

YOKOHAMA--Bereaved family members of victims of a deadly stabbing spree at a nursing facility for the disabled in 2016 expressed grief and anger at the accused on Jan. 15 in Yokohama District Court in statements read out by prosecutors.

A mother of one of the victims at Tsukui Yamayurien, a care home for people with disabilities in Sagamihara, Kanagawa Prefecture, demanded that the defendant pay for the crime with his life. The family of another victim said, "my daughter was irreplaceable," as listening families cried.

The victim impact statements were read at the third court hearing in the murder trial of Satoshi Uematsu, 29, who has admitted to killing 19 people and injuring 26 others on July 26, 2016. The trial opened Jan. 8.

On Jan. 15, the Yokohama District Court called one of the victims, a 19-year-old woman, by her first name of Miho, instead of by a pseudonym, at her mother’s request. The district court usually only allows the use of a full name or a pseudonym.

One of the victims was identified in the first hearing. But the others were called “Ko A” or “Otsu B.” “Ko” refers to those who were killed, while “Otsu” is used for those injured.

On Jan. 15, prosecutors read aloud statements from the bereaved families of 12 of the 19 victims.

The older brother of “Ko D,” a 70-year-old woman who died in the attack, said, “I want to know how the defendant felt when committing the murder.”

The brother, who was 86 when his sister died, visited her once a month without fail. When he arrived at the nursing facility, she took his hand with delight and they would go for a walk together. After he would spend time with her until the final minutes of visiting hours and would say, “I have to go home,” she sometimes showed a sad expression.

Then, he would take her hand and go for a walk again one more time. When he would tell his sister again that he needed to go home, she would nod and release his hand. He left for home while looking back many times at her.

“Ko L,” a 43-year-old man, was diagnosed with brain paralysis when he was 1. While doctors said that he would’t live much longer, his mother raised him by infusing him with her determination, “I won’t let you die."

His mother would visit him once a month. About two weeks before he was killed, she took him by bus to a restaurant in front of Sagamiko Station in Sagamihara. He smiled while eating a fried “teishoku” set meal and "yakisoba" fried noodles. Her life was financially difficult, but she spoiled her son when she would visit him.

The mother of victim “Ko B,” a 40-year-old woman, reminisced on her daughter's visits home. “When we were on the sofa, she hugged our backs. When she demanded coffee, I let her drink a cup. Then she would flash a big smile. Although we couldn't communicate by words, our family had a fun life built around her,” said her mother.

Her family photos were shown on a monitor screen at the court.

“Please see my daughter’s smile. I want (the defendant) to know about the life he robbed,” she said in her statement to the court.

The mother concluded with the words, “Please let (the defendant) fully understand the importance of 19 people’s lives and pay for his crime with his death.”

At the start of the third court hearing, the presiding judge said the court changed its stance in calling one of the victims “Ko A” to “Miho.”

It was a rare measure requested by the woman's bereaved family.

According to a lawyer representing the family, Miho's mother had asked the district court to refer to her daughter by her first name. She did not want her last name disclosed.

The mother said in a written statement, “I also wanted the citizen judges to recognize Miho’s existence by using her name. I am happy with the release of her name.”

Hidemichi Morosawa, the former president of Tokiwa University, specializing in victimology, said: “I have never heard of a similar case and this measure is rare. The court decision respecting the feelings of the bereaved family is appreciated.”