A clip from an Asahi Home Graph newsreel film shows a parade of military dogs in Otaru, Hokkaido, in 1939. (The Asahi Shimbun) 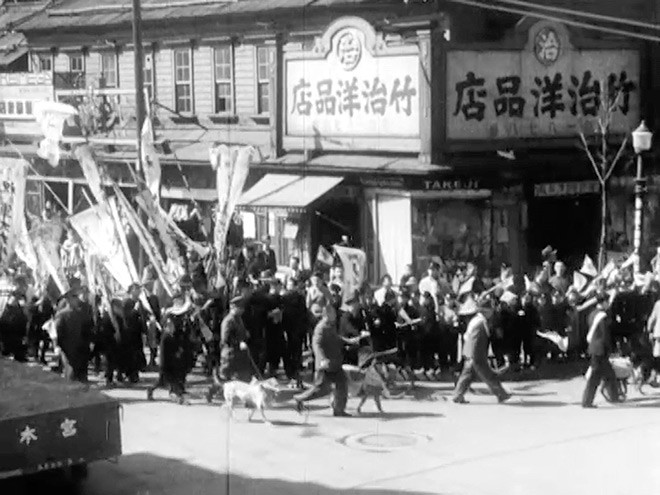 Military dogs march in Otaru, Hokkaido, in May 1939 in a news film for children. (A screenshot from an Asahi Home Graph film)

The one-minute movie for children was filmed 81 years ago and shows well-wishers seeing off a parade of dogs here in southern Hokkaido.

“Military dogs are performing distinguished service alongside troops,” the narrator in the film, titled “Gunyoken no Shussei” (Deployment of military working dogs), says. “This is a story about brave dogs that took off to battlegrounds from a city in Hokkaido.”

The Asahi Home Graph news film was one of 32 recordings that were returned to Japan. They were seized by U.S. occupation forces and taken to the United States after the end of World War II.

The film about the dogs was produced by The Asahi Shimbun and shown at theaters during the war.

In the parade in Otaru, the military dogs and their owners departed Sumiyoshijinja shrine, a local landmark where many festivals and events are still held today, and headed toward Otaru Station. The locals gave hearty cheers to the canines as they walked down a main street.

The film is believed to have been shot in early May 1939, shortly before the Nomonhan Incident in which the Soviet army and the Imperial Japanese Army clashed near the border of Mongolia and Manchuria in northeast China.

Two days after the parade, The Asahi Shimbun’s Hokkaido edition carried the story about the canine soldiers along with two photos. The headline read: “Military dogs heroically head to battlefield.”

The Tokyo-based military dog association reported in its journal the following month that the Otaru mayor visited the association’s branch in the city to give words of encouragement.

A large space in the journal was devoted for a speech given by an elementary school girl during the ceremony for the dogs at Otaru Station.

Military working dogs were trained to deliver messages, conduct searches, give warnings about danger and perform other roles crucial to the front-line troops.

The dogs were originally kept by ordinary households and underwent basic training under the guidance of the association. They also had to pass a test given by the Imperial Japanese Army for selection for deployment in China.

In 2019, a dog took part in a U.S. military raid that killed Abu Bakr al-Baghdadi, the leader of the Islamic State terrorist group, in Syria.

Eight years earlier, a U.S. commando team, including a dog, killed Osama bin Laden, founder and leader of al-Qaida, in his hideout in Pakistan.

The capabilities of dogs in warfare rose to prominence in World War I, when tanks, poisonous gases and aircraft were rolled out as new weaponry.

European countries sent armies of military dogs to the front lines, where they would search for injured soldiers, deliver first aid and guide relief units. Their service proved invaluable in combat zones.

The Imperial Japanese Army formed a task force to train dogs for similar services after it learned of the pivotal role they played in the battlegrounds of Europe.

The Kwantung Army, an elite unit of the Imperial Japanese Army based in Manchuria, deployed military dogs in the Manchurian Incident of 1931.

One embellished tale about the bravery of dogs that were killed in action was carried in a textbook for Japanese elementary school children to bolster morale in Japan’s war efforts.

But little information remains about the dogs used by Japanese troops.

An estimated 50,000 to 100,000 dogs were sent to areas of conflict over eight years between the start of the Second Sino-Japanese War in 1937 and the end of World War II, according to Tsugio Tokairin, head of the history educationalist conference of Tokyo.

Tokairin is one of the authors of a three-volume book, “Nihon no Senso to Dobutsutachi” (Japan’s war and animals), published by Chobunsha Publishing Co.

Dogs deployed in mainland China were active primarily for guard, patrol and messenger duties. Some were used to keep watch over Chinese laborers who were building positions for the Japanese army.

Tokairin, 68, said he came across information about military dogs during his 2018 trip to Dongning county in China’s northeastern Heilongjiang province, where remnants of a Japanese army fortress still exist.

The plate said a Japanese military dog bit a Chinese laborer to death.

The dogs themselves apparently suffered immensely during warfare.

The May 1945 edition of “Kansho” (All-out victory), a journal for commissioned officers of the Kwantung Army, said military dogs are “difficult to manage” and “prone to diseases.”

Their average life span was four years and one month, and their average period of service was two years and four months, according to the journal.

The dogs were not allowed to board vessels carrying Japanese troops home after the end of the war, meaning they were never reunited with their owners.

Some of the canines left behind were adopted by local residents. But others were not so lucky.

“Some were butchered for their meat due to a serious shortage of food,” Tokairin said.

Many of the dogs left behind showed they had been rigorously trained to make them loyal to their Japanese masters.

A Chinese book on the repatriation of Japanese prisoners of war in China, published in Jinan in Shandong province in 1991, said the Kuomintang of China seized the cream of the crop of the Japanese military dogs to retrain them for the party’s services.

The dogs, however, would only obey orders given in Japanese, and almost all of them were killed as a result, according to the book.