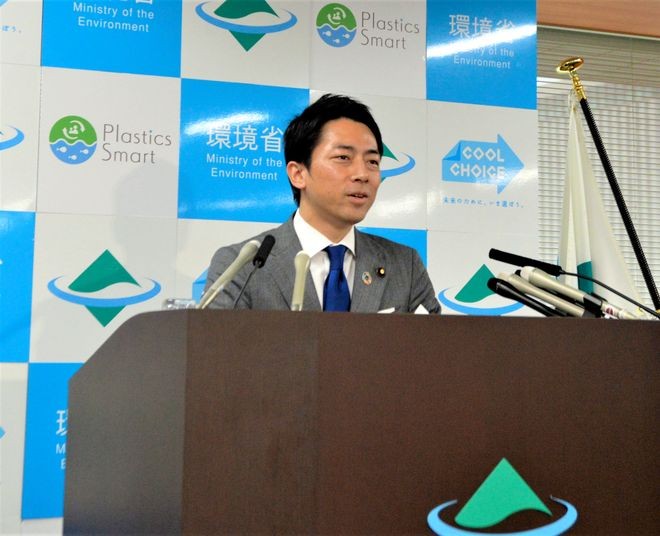 Environment minister Shinjiro Koizumi announces the birth of his first child at his office in Tokyo’s Chiyoda Ward on Jan. 17. (The Asahi Shimbun)

Environment minister Shinjiro Koizumi, who has said he will take paternity leave in a rare move for a Japanese man, announced on Friday the birth of his first child--a boy.

Koizumi, son of charismatic former Prime Minister Junichiro Koizumi and seen as a future leader himself, said on Wednesday he was planning to take two weeks of leave over three months, in an effort to become a role model for Japan’s working fathers.

But some lawmakers have criticized his interest in taking parental leave, saying he should prioritize his public duty.

The telegenic Koizumi, popularly known as Shinjiro to distinguish him from his father, grabbed headlines in the summer of 2019 with news he was marrying Christel Takigawa, a French-Japanese television personality, and that they were expecting a child. Soon after, he was named environment minister.

Talking to reporters at the prime minister’s office, Koizumi said he had come straight for the hospital and had been by his wife’s side for the birth, Japan Broadcasting Corp. (NHK) quoted him as saying.

“Both of them are doing well, that’s the most important thing,” he added.

Prime Minister Shinzo Abe has been trying to encourage more men to take paternity leave, and for businesses to allow a better work-life balance, as part of his “Womenomics” program of bolstering women’s employment.

While Japan’s parental leave policies are among the world’s most generous, providing men and women with partially paid leave of up to a year, or longer if there is no public child care, just 6 percent of eligible fathers take child care leave, and most of them for less than a week, according to government data.