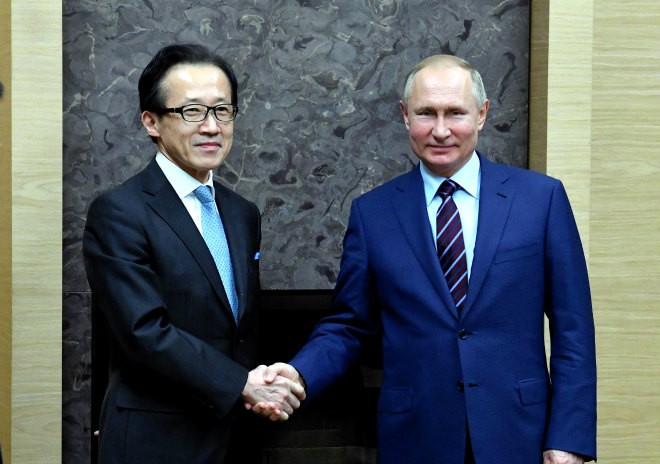 Shigeru Kitamura, secretary-general of the National Security Secretariat, and Russian President Vladimir Putin greet each other ahead of talks at Putin's official residence in a Moscow suburb on Jan. 16. (Ryosuke Ishibashi)

Having such a treaty in place is viewed by Japan as its best chance of regaining sovereignty of some or all of the Northern Territories, a cluster or islands off Hokkaido seized by the Soviet Union toward the close of the war.

It was Shigeru Kitamura’s first visit to Russia since he rose to the position of secretary-general of the National Security Secretariat last September.

During the talks, Putin described relations between the two countries as “developing steadily” and expressed a desire to continue talks with Prime Minister Shinzo Abe to put bilateral relations on a stronger footing.

Putin said he looked forward holding talks with Abe on furthering relations and discussing "when and where we will be able to continue our meetings and consultations.”

In reply, Kitamura, a career intelligence officer, underscored the importance of building a lasting partnership between the two countries.

“Japan and Russia are two nations that should play a responsible role in the security of East Asia,” he said. “The two nations should aim to become mutually trustworthy partners by strengthening their strategic ties.”

The previous day, Kitamura met with Nikolai Patrushev, secretary of Russia’s Security Council, to discuss a wide range of topics, including relations between Japan and Russia, North Korea and growing tensions in the Middle East, according to the Japanese Foreign Ministry.

Abe and Putin agreed in autumn 2018 to accelerate negotiations toward the conclusion of a peace treaty, but progress has been slow due to differences in perceptions about national security and history.