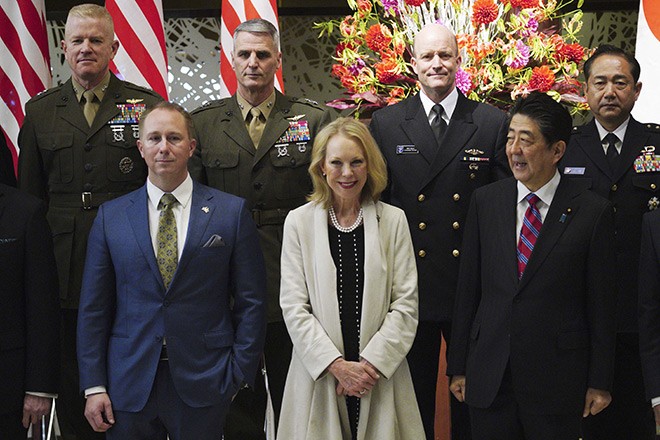 Prime Minister Shinzo Abe pledged Sunday to bolster his country's role under its security pact with the U.S. in “outer space and cyberspace,” as the allies marked the 60th anniversary of a treaty that has been the basis for their postwar defense alliance.

Abe's grandfather, Nobusuke Kishi, who was prime minister at the time, signed the treaty in Washington on Jan. 19, 1960, with U.S. President Dwight Eisenhower. The treaty allows for the stationing of tens of thousands of U.S. troops and the deployment of American warships in Japan. In exchange, the United States is obligated to protect Japan in case of enemy attack.

“We have elevated the relationship to one in which each of us, the U.S. and Japan, protects the other, thereby giving further force to the alliance,” Abe said in his opening remarks. “Going forward, it is incumbent upon us to make it even more robust, to make it a pillar for safeguarding peace and security in both outer space and cyberspace.”

The anniversary comes as Washington adds pressure on Japan to shoulder more of the financial cost and play a greater defense role in the Asia-Pacific region to make up for a receding U.S. presence.

“As the security environment continues to evolve and new challenges arise, it is essential that our alliance further strengthen and deepen,” U.S. President Donald Trump said in a statement marking the anniversary. “I am confident that in the months and years ahead, Japan’s contributions to our mutual security will continue to grow, and the Alliance will continue to thrive.”

The bilateral security treaty, initially designed to facilitate a greater U.S. presence in the Asia-Pacific region as a deterrence to Soviet threats, is a legacy of the Cold War era. Since the collapse of the Soviet Union, Washington and Tokyo have redefined the pact as a pillar for maintaining stability and prosperity in the region in the face of new threats from China and North Korea.

Sunday's anniversary was also a time for the grandchildren of the two leaders who signed the treaty to revisit history. In his opening remarks, Abe told Mary Jean Eisenhower, who was a guest at Sunday's reception, that their grandfathers played golf together in 1957 at Burning Tree Club near New York, fostering a friendship that led to the signing of the treaty.

Abe and the younger Eisenhower together looked at photos of their grandfathers playing golf that were on exhibit outside a reception hall.

President Eisenhower was to visit Tokyo for a ratification ceremony and perhaps another round of golf later in 1960, but the planned reunion never happened because escalating anti-U.S. military protests in Tokyo forced him to cancel his trip and Kishi to step down as prime minister.

Abe has pushed for Japan’s Self-Defense Force to expand its international role and capability by bolstering cooperation and weapons compatibility with the United States, as it increasingly works alongside American troops. He is also campaigning to achieve his and his grandfather's long-cherished dream of amending Japan's postwar, U.S.-drafted pacifist Constitution.

In 2015, Abe reinterpreted Japan’s Constitution to allow the use of force in defending Japan and its allies. He has bolstered Japan's defense budget, citing missile threats from China and North Korea.

Since Trump took office three years ago, Japan has increasingly purchased costly American weapons, including F-35 stealth fighter jets, in an apparent attempt to reduce its trade surplus with the United States.