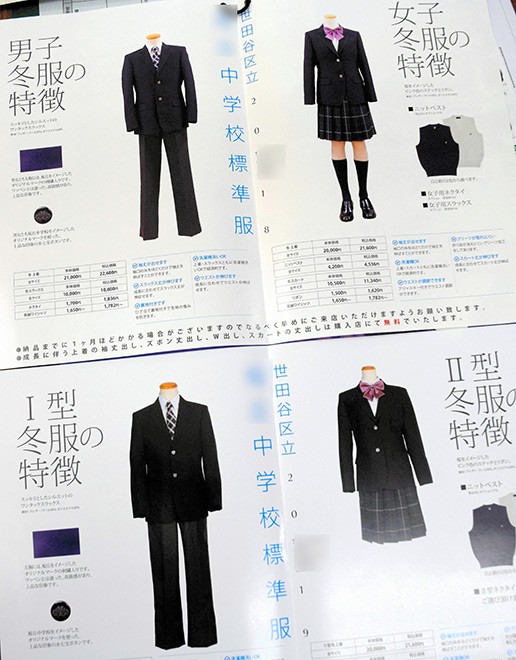 Public junior high schools in Tokyo’s Setagaya Ward last spring started allowing students to freely choose their uniforms from among a pair of pants, a skirt and a blazer. The schools have replaced old pamphlets, top, which are binary gender-specific, with new ones, bottom, that do not specify gender. (Asahi Shimbun file photo)

Tokyo’s Minato Ward plans to adopt the first ordinance in Japan that gives sexual minorities the freedom to choose school uniforms and work attire based on their own gender identity.

The ward office intends to propose an ordinance amendment to grant “freedom of gender expression” for people identified as LGBT (lesbian, gay, bisexual and transgender) at a regular assembly session that starts in February and hopes to enforce it from April.

Gender expression includes clothes, language and behavior that people use as an expression of their gender in society.

Sexual minorities, particularly people who identify themselves as transgender, have faced difficulties in school and at work where they are required to wear gender-specific uniforms. They are torn between their self-identified gender and the gender assigned or assumed by society.

According to a Minato Ward survey of sexual minorities who were 18 or older and living in Tokyo in 2018, 13 percent of respondents had suffered from bullying in school.

Moreover, 22 percent of the respondents said they had considered suicide.

Ward officials are proposing a revision to the gender-equality ordinance to clearly state that individual freedom of gender expression should be respected at school, work and other places.

The revised ordinance will cover residents and companies in the ward, but it will not prescribe penalties for offenses.

According to Minato Ward officials, transgender students at junior high schools in Tokyo have been allowed to choose either pants or skirts and other types of school uniforms. But the school’s principal has had the last word on the decision.

“Once the ordinance is established, schools will be able to offer individual support based on legal grounds,” a ward official said. “We hope the ordinance helps to resolve the difficulties that transgender people face in their lives.”

In response to the results of its survey, the ward office has been discussing proposals to revise ordinances to eradicate prejudice and discrimination against sexual minorities.

One other proposal includes an official recognition system of same-sex couples.

“Attention to sexual minorities has always been requested, but there are quite a few schools that have delayed handling the school uniform issue and other requests,” said Mitsutoshi Yatsunami, a professor at the Tokyo University of Science who specializes in pupil guidance and school regulations. “Creating an ordinance will give a boost to school reforms.”

The ward’s attempts are being welcomed by supporters of sexual minorities.

“It is significant that freedom of gender expression is clearly stated in (an ordinance),” said Mika Yakushi, head of ReBit, a nonprofit organization based in the capital’s Shinjuku Ward that promotes understanding and enlightenment of LGBT issues at companies and schools.

“I hope it will become a springboard for schools and companies to create an environment where people can proactively talk about gender expression, as well as sexual orientation and gender identification,” Yakushi said.