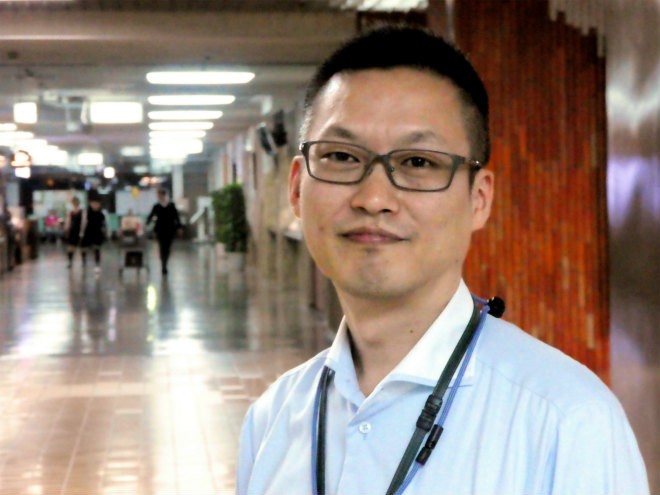 OSAKA--Gaku Okamoto has faced his share of discrimination for being upfront about his sexual identity.

When the openly gay medical social worker first started working in the profession, someone from the public greeted him with the jab, “Why would a hospital ever hire a guy like that?”

Okamoto, now 42, was undeterred by such insults. For the last 13 years at a medical center here, he has offered encouragement and mental health care to HIV carriers and AIDS patients, many of whom are gay.

His courage to stand up for his identity has made Okamoto a much sought-after counselor at the National Hospital Organization Osaka National Hospital, where he now has counseled 2,000 individuals with HIV or AIDS.

Word of his good reputation has become so widely known that “when in trouble, visit Gaku-chan,” is a common refrain among those in the city battling the illnesses.

Despite the fact that AIDS is no longer an epidemic and can now be treated and controlled with drugs, there appears to be no end in Japan to cases where hospitals refuse to examine people with HIV or employers cancel decisions to hire them for no explicable reason.

Okamoto said one of his patients was suicidal after having a job offer rescinded, but he was able to talk the patient out of it.
Six years ago, Okamoto began holding a once-a-month gathering in Osaka where sexual minorities with HIV could chat with each other over cups of coffee.

“I want to support the patients half a step behind them,” Okamoto said, meaning that he doesn't want to be intrusive.

Okamoto, having frequented gay bars since he was in college, was well acquainted with the toll AIDS had inflicted on the gay community and the public's hysteria over the disease.

Feeling a strong desire to help patients of the disease, he joined a nongovernmental organization for HIV research, got to know doctors treating it, and went on from there to his current post.

Okamoto said he first realized he was gay when he was in the fifth grade in elementary school but sought to conceal it, later dating girls in junior high and high school to help do so.

He said for a long time he was convinced that society would never accept him if he revealed his sexuality.

But he said watching numerous American films that showed openly gay characters proudly living their lives gave him the confidence to follow suit.

“Though I once believed I was a nobody unless I got married, I realized it's my right to live however I choose,” Okamoto said.