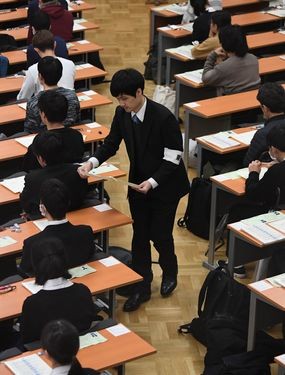 Students wait for the National Center Test for University Admissions at an examination hall in Tokyo's Bunkyo ward on Jan. 18. (Reina Kitamura)

Philosopher Tatsuru Uchida says he never minds how and where his writings are quoted.

In fact, he welcomes their being used, especially in school entrance tests and so-called practice exams, because students taking such tests must read between the lines very closely to accurately assess the author's intent.

"I personally feel that readers who peruse my writings so seriously are quite hard to come by," Uchida notes in "Machiba no Media Ron," a collection of lectures he has given at a university.

It is true that the level of concentration with which people read test questions is unlike anything they apply to routine reading. And the more intense they focus, the deeper they are impressed by the beauty or profundity of the writing.

But one does not have to be taking a test to experience such mental exhilaration.

If you are able to get hold of a copy of the Jan. 19 morning edition of The Asahi Shimbun, I would strongly urge you to read an excerpt from the novel "Kage" (Shadow) by Tamiki Hara (1905-1951), which was used in this year's Japanese test for the National Center Test for University Admissions.

The protagonist, an author, is closely acquainted with a young fishmonger's apprentice who is friendly and liked by everyone. But the young man is called up for military service in Manchuria, where he contracts a lethal disease.

"Because he was so good-natured, he was probably forced to take on an excessively demanding task," the protagonist muses.

Through this one youth, the author directs the reader's focus to the lives of innumerable others like him.

There is something that disturbs me deeply about the future of senior high school Japanese language education.

The present "Gendai-bun" (contemporary Japanese) subject is set to be split into two--"Ronri Kokugo" (logical Japanese) for teaching practical writing skills, and "Bungaku Kokugo" (Japanese literature) for teaching poetry and other literary works--and students will be allowed to choose between them.

My worry is that this change may result in reduced chances for young people to read works of literature and critical commentaries that will truly stir their hearts.

I just pray that my fear will prove to be unfounded.