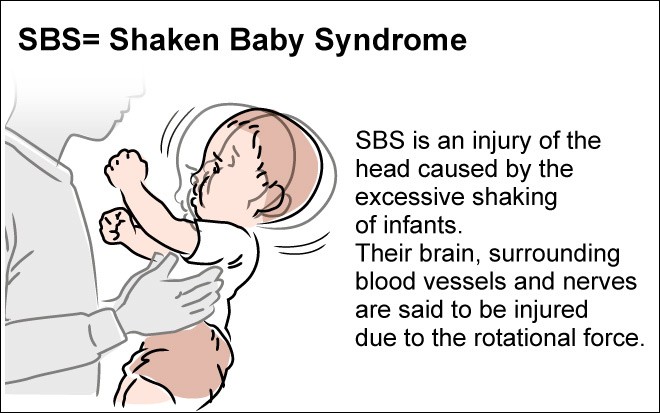 A medical dispute over the determination of shaken baby syndrome (SBS) that resulted in a string of acquittals in the Kansai region is at the forefront in a Tokyo trial involving the death of a baby girl.

Hayato Chuman, 43, is charged with shaking his 1-year-old infant daughter, Hikari, and injuring her head at their home in Machida, western Tokyo, around midnight on Jan. 13, 2017.

The infant died on March 22, 2017, due to lung inflammation caused by the aftereffects of her head injury.

In the trial that started on Jan. 20 at the Tokyo District Court's Tachikawa branch, prosecutors contend that Hikari's death resulted from SBS as she exhibited three major symptoms--subdural hematoma, retinal bleeding and swelling in the brain.

However, some experts argue that assuming abuse stemming from a diagnosis of SBS lacks scientific validity, a defense which has led to a string of recent acquittals since 2017 in western Japan in similar cases.

SBS is a head injury caused by the excessive shaking of young children. An infant's brain, surrounding blood vessels and nerves are believed to be injured due to the rotational force.

In the Tokyo trial, being heard by citizen judges, many doctors are scheduled to offer expert testimony for the prosecution and the defense.

In opening statements on Jan. 20, prosecutors said that when Hikari became limp in her baby bed and stopped breathing, her mother was taking a bath while Chuman was on the balcony drinking alcohol.

They emphasized that the father was the only person in a position to injure the girl, and the three symptoms would not have arisen unless she was violently shaken.

Defense lawyers argue that Chuman noticed something strange occurring with his daughter only after his wife screamed after taking her bath. They asserted the infant's symptoms were not due to SBS, saying that it is not uncommon for the three symptoms to arise from a disease and that she often had a pale face.

His wife, who divorced him after the incident, appeared as a witness. She testified that Hikari looked pale in the days before the incident. But on the day the infant was found not breathing, her face looked pure white like a doll and appeared totally different from usual.

She also said that Chuman had never committed violence against Hikari, and she didn’t believe that he had picked her up before or after she took her bath.

Disputes have emerged in Japan and overseas regarding the validity of traditional methods used to determine shaken baby syndrome. In a hearing scheduled for Jan. 24, the court plans to conduct a “simultaneous examination."

Under the simultaneous examination, a pediatrician, who is said to be an advocate of the theory and has diagnosed many SBS cases, and a forensic pathologist who discounts the theory, will both testify.

The SBS theory is that if the three symptoms appear without any apparent external injury to the infant’s head, it can be assumed that the infant was violently shaken.

The basic theory was advocated by a doctor from Britain in 1971 and was used to build abuse cases in the United States in the 1980s and 1990s.

In Japan, the theory has been applied to criminal cases from the 2000s. However, during the period, studies in the United States and European countries that concluded, “Similar symptoms could occur due to disease and minor falls,” were released in succession.

In Sweden in 2014, the Supreme Court said that the SBS theory lacks scientific evidence and acquitted a father indicted for committing a crime.

In 2017, Japanese lawyers and researchers set up a project group to closely examine evidence pertaining to SBS in Osaka. The project developed legal representation against the recognition that “the three symptoms equal SBS,” resulting in at least six acquittals in related cases in the Kansai region--one in Nara Prefecture and the other five in Osaka Prefecture--in and after December 2017.

In rebuttal, the Japan Pediatric Society participated in a joint statement in 2018, written by pediatricians and other doctors in the United States, noting that the SBS theory is medically valid. The statement conveys that they cannot fail to recognize abuse cases.

(This article is written by Shunsuke Abe and Nobuaki Tanaka.)