Panels back at Ryoanji after 123 years, but with Western touch 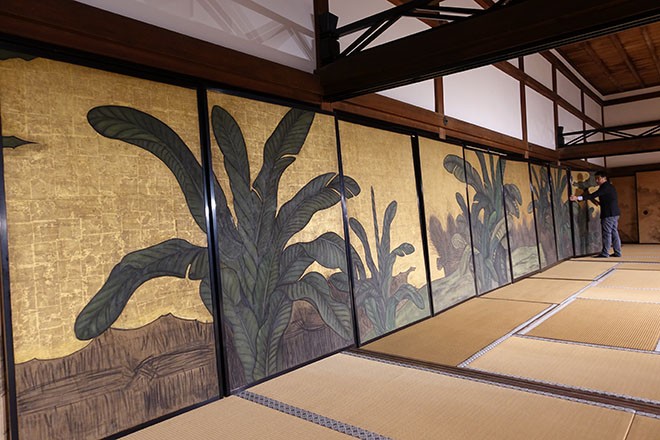 These “fusuma-e” sliding-door paintings, which show images of “basho” plants, are finally back at Ryoanji temple in Kyoto. (Shunji Morimoto)

KYOTO--Ryoanji temple here, which boasts one of the finest Zen rock gardens in Japan, is celebrating the return of nine sliding-door paintings that it sold off more than a century ago.

The “fusuma-e” paintings, which depict “basho” (Japanese banana) plants against a gilded background, had been boldly retouched in Western style, but Akiharu Iwata, the temple’s chief clerk, found no cause to be disappointed.

“Once you have parted with something, it rarely comes back to you,” he said. “I am genuinely filled with joy.”

The paintings on “fusuma” sliding-door panels are on show to the public through June 10 in the temple’s Hojo, or the abbot’s chamber.

The panels are believed to date from the early 17th century, and each measures about 180 centimeters tall. Placed side by side, they span a combined width of more than 10 meters.

Temple officials learned in early 2017 that the nine basho paintings were in the possession of a collector living in Shizuoka. They were returned to the temple last December.

Iwata, who is also a certified curator, believes that the basho images are from 90 sliding-door paintings that originally decorated the Hojo building but put on sale in 1895 when the temple encountered financial difficulties brought about by the anti-Buddhist movement during the Meiji Era (1868-1912).

The paintings were initially bought by another Kyoto temple, and then ended up in the hands of Denemon Ito (1861-1947), a Kyushu businessman. The latter let go of the works sometime around 1945, shortly before his death, and they were resold to a British art dealer. The Shizuoka collector purchased them around 2003.

“The images were boldly retouched later, and shading was added in the style of Western painting,” said Yuya Fukushi, an associate curator with the Kyoto National Museum’s Curatorial Division. “The door handles have also been removed and replaced, so the paintings look quite different from how they did originally.”

Ryoanji officials said eight of the 90 sliding-door paintings sold off more than a century ago are owned by the Metropolitan Museum of Art in New York, while four others are in the possession of the Seattle Art Museum.