Fear over future keeps Japanese from marrying, having children 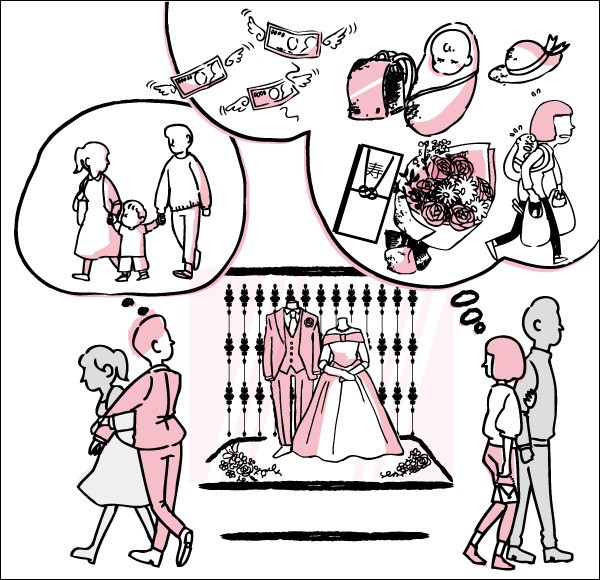 Many Japanese want to marry and have children but are hesitating to do so due to financial and other obstacles, two Asahi Shimbun surveys have found.

Economic instability among young people and temporary workers is making many put off or abandon the idea. Despite wanting to get hitched, many Japanese also said they don't feel it is necessary for them to do so.

Fifty percent said one “should not necessarily marry” in a mail survey the Asahi conducted in November and December. Respondents who said people “should marry if possible,” fell to 48 percent from 59 percent in an Asahi survey conducted in 2012.

Younger women tended not to view marriage as essential. Seventy-eight percent of female respondents aged 18 to 29 said people should not necessarily marry, whereas half of women in their 50s to 60s felt that way.

Sixty-nine percent said “more women should work outside the home.” Only 32 percent said “husbands should primarily earn a salary to cover living expenses and wives should mainly deal with housework and child-rearing.”

Still, 77 percent--82 percent of men and 74 percent of women--stuck to the traditional idea that “married couples should have children.” By age, 67 percent of respondents in their 40s supported the idea, though more than 70 percent of those in their 30s or younger were in favor of it.

As for raising children, 63 percent still believe “mothers should take care of offspring at home while they are little.” The ratio was lower among respondents in their 30s or younger, but more than 50 percent of them said mothers should take on the role.

Although most respondents, or 36 percent, said people wait longer to marry or simply don't wed because their “views on marriage have changed,” 30 percent cited “young people’s unstable employment and income” as the reason.

Nearly 40 percent of people in their 30s or younger cited unstable employment and income as their reason for not marrying and starting a family.

“Japan is currently a society where having and raising children is difficult,” according to 72 percent of respondents.

While most cite the high financial cost of raising children as their most serious problem, many also pointed to the difficulty of continuing to work while looking after them.

“Many people believe married couples should have children but they also think child-rearing and their education cost too much, feeling anxious about their employment prospects and income,” said Yamada. “Those who said one should not necessarily marry likely include many people who have given up on marrying out of fear of problems after marriage.”

Sixty percent said Japan should become a “society where it is taken for granted to put more priority on the family than work.” Respondents who said it should become common for male employees to take child-care leave accounted for 69 percent.

The ratio of men who take child-care leave topped only 5 percent in fiscal 2017, according to the Ministry of Health, Labor and Welfare.

The Asahi mailed questionnaires to 3,000 individuals and received 2,038 valid responses.

HOW MUCH DO YOU MAKE?

The Asahi Shimbun, working with online research firm Macromill Inc., also conducted an Internet survey on unmarried individuals between the ages of 25 and 34 in December that drew 1,032 responses.

The results showed 80 percent want to tie the knot but only 60 percent think they will be able to marry.

But only 59 percent of men and 64 percent of women said they think they “will be able to marry at some point in the future.” Lower-income earners tended to answer that they “cannot marry” and “do not have someone to date.”

Eighty-five percent of female respondents said they take into account the type of employment of their would-be spouses, such as whether they are permanent or temporary employees.

For 72 percent of women, their partner's income is a “non-negotiable condition” for marriage. A potential marriage partner's annual income must be “at least 4 million yen ($36,900),” 41 percent said. When combined with those who set targets of “6 million yen,” “8 million yen” and “10 million yen,” the ratio rises to 63 percent.

Meeting the women’s “condition” for marriage is a difficult task for temporary workers.

“Addressing the issue of too many temporary workers, reducing risks in young people’s lives and a developing society where anyone can have families without any anxiety will help deal with the dwindling birthrate,” Yamada said.

While 85 percent said they would like to “live with my loved ones,” 77 percent said marrying would give them “a place to relax” or that they “do not want to live alone when becoming elderly.”