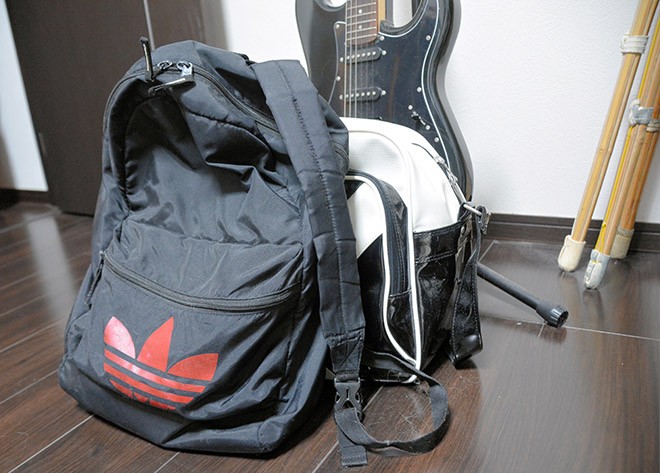 A backpack and a bag used by a 17-year-old high school student before he committed suicide in Shunan, Yamaguchi Prefecture, in July 2016 (Satsuki Tanahashi)

YAMAGUCHI--Bullying by members of a school tennis club and inappropriate staff behavior led to the suicide of a 17-year-old student in 2016, according to a reinvestigation demanded by the bereaved family.

“He suffered from severe stress by being shut out by his important friends,” Dono said at a news conference here.

The second-year student of a prefectural high school in Shunan, Yamaguchi Prefecture, killed himself by jumping in front of a freight train at a station before dawn in July 2016.

In November 2017, a third-party committee set up by the Yamaguchi prefectural board of education released a report, which said, “We cannot conclude that bullying was the only cause of his suicide.”

The bereaved family then asked for a reinvestigation.

According to a report compiled by the verification committee, the student belonged to the school’s tennis club but also joined the baseball club as a “helper” on the request of a club adviser.

As a result, he had no time to sufficiently take part in the tennis club’s activities.

Members of the tennis club told him to remove his belongings from the club’s room. They also forced him to withdraw from the club’s group account on the Line messaging app.

The verification committee, referring to the withdrawal from the Line account, said, “It was one of the cruelest acts for today’s high school students, who put importance on social bonds.”

The student’s family members had uncovered details of bullying by viewing the messages the son wrote in the Line app.

They did not know his four-digit passcode for Line, so three family members tested numbers starting at 0000.

After three months, they finally broke through.

The tennis club members had given the student a nickname that made fun of his physical appearance. They also tied a ribbon to his head and took photos with a smartphone.

The committee confirmed 18 bullying acts against the student.

The committee also found five “acts similar to bullying” by teachers and school officials, including obliging him to do chores related to club activities.

“If teachers and school officials had paid sufficient consideration and handled the case appropriately, his suicide could have been prevented,” the committee said.

The parents of the student held a news conference at the Yamaguchi prefectural government office on Feb. 6.

“What I was surprised at and felt most angry about was the bullying by teachers,” the father said. “I want them to think again about how they should deal with children.”

The mother said: “The submission of the report does not mean the end to this problem. I want to see what measures are taken to prevent a recurrence.”

(This article was compiled from reports by Rei Inoue, Satsuki Tanahashi and Koichi Fujimaki.)