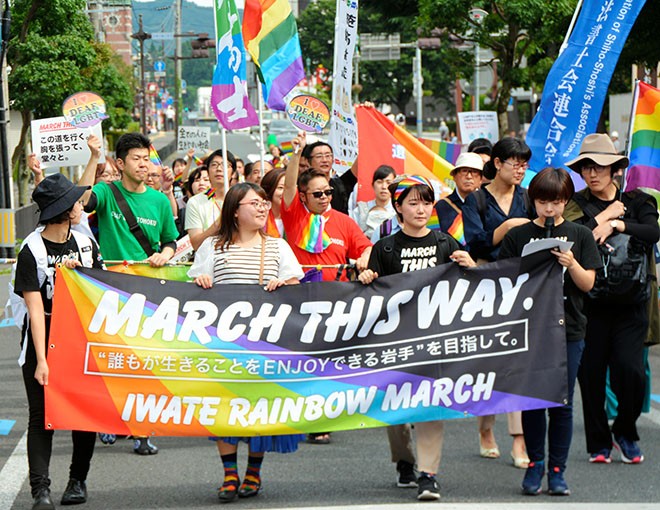 More than 40 percent of respondents who identify with being sexual minorities said they were harassed or felt discomfort as college students sitting for job interviews.

The finding was among the results of an online survey by ReBit, a nonprofit organization established to raise greater awareness of lesbian, gay, bisexual and transgender (LGBT) issues in society.

Another finding was that 96 percent of respondents did not resort to having consultations with university career planning centers or other support organizations about the problems they were facing.

Mika Yakushi, the head of ReBit, said one objective of the survey was to encourage companies to use more appropriate measures when interviewing prospective employees.

"We hope to promote understanding among company officials in charge of personnel matters and job interviews that a certain number of interviewees are sexual minorities, so those officials do not make comments based on blind assumptions," Yakushi said.

The survey was conducted between July and September 2018, and responses were received from 241 individuals who considered themselves a sexual minority and went through the job interview process between 2008 and 2018.

The survey found that 42.5 percent of lesbians, gay and bisexual individuals experienced some sort of problems during the interviews, while 87.4 percent of transgender individuals said they faced difficulties.

Among the most common experiences were questions or comments by interviewers that were preconditioned on the fact that job seekers were not sexual minorities. The respondents also said they often were unable to reveal their sexual identity to the interviewer.

Many transgender people said they were troubled over having to state their gender in the resume they submitted to the company.

Seventy-eight percent of the respondents said they never revealed their sexual identity to the companies they applied to. When asked why, 71 percent said they felt they might be discriminated against or harassed, while 69 percent said they were afraid that doing so could jeopardize their chances of landing the job.

ReBit will continue to carry out the surveys to ascertain if there is any change to the corporate mind-set in years to come, Yakushi said.