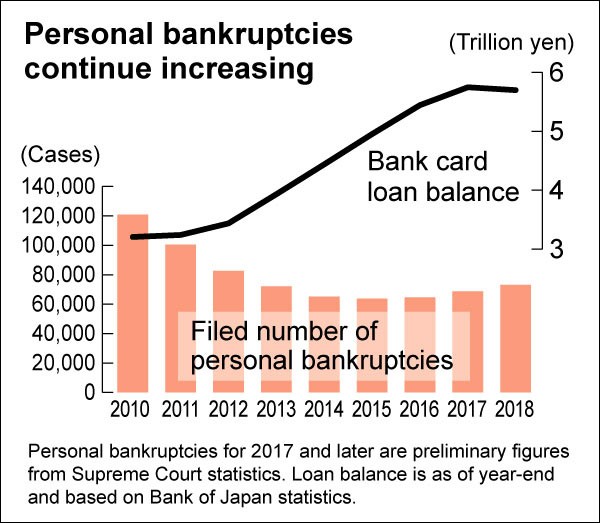 Personal bankruptcies in Japan soared 6.2 percent in 2018 compared to a year earlier, rising three years in a row, to their highest since 2012, according to a Supreme Court survey.

While quick loan outlets blamed for pushing up bankruptcies have been restricted from offering excessive loans, personal bankruptcies have continued climbing because consumers have turned to piling up debt on their bank cards.

The number of personal bankruptcies fell after peaking at about 240,000 in 2003 because the government ordered easy money lenders to restrict their loans after instances of individuals incurring multiple debts became a significant social problem.

The number of bank card loans, which are not bound by the restrictions slapped on quick loan firms, although they offer similar financial services, have shot up since 2013.

Personal bankruptcies experienced an upswing in 2016 for the first time in 13 years, and have continued to rise since.

Under criticism for providing excessive loans that borrowers would be hard-pressed to pay back, banks have started restricting their card loans.

The bank card loan balance of borrowers also fell for the first time in eight years as of the end of 2018.

However, as there is a time lag before excessive loans lead to bankruptcy, the trend of increasing personal bankruptcies is likely to continue into the near future.